You are here: Home > Triple star performance at county championships

Triple star performance at county championships 7 January
The Merseyside Cross Country Championships at St Helens Sherdley Park delivered three individual titles and a team trophy to the Liverpool Pembroke Sefton club. Early in the proceedings U15 Rosie Johnson demonstrated a maturity beyond her years, not only in 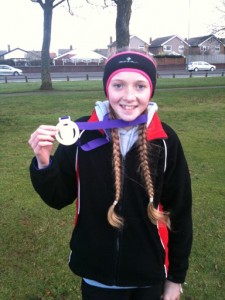 holding off a determined challenge from a strong Wirral rival but turning in a powerful closing charge that delighted her supporters. Thereafter the expression, `Let`s do a Rosie Johnson’ spread through the camp.Some twenty years her senior Kirsty Longley took on the pride of Liverpool Harriers in the shape of Jenny Clague and Maria Barrett. It looked like a stroll in the park for the yellow vests but Kirsty gradually closed an initial gap and surged at the start of lap two. Clearly surprised a monumental battle ensued but this was to be the LPS girl`s day. Barrett buckled first but former international Clague took longer to dislodge. Eventually even her head went down and Kirsty completed the most magical moment of her career, coasting home to the county title. Already pre-selected to run for the North of England in an inter-area match in Cardiff a week later the selectors must be congratulating themselves on their prescience.

Already a good afternoon for the club but more was to come. Favourite for the U20 title Toby Loveridge strode majestically to victory but the real excitement was occurring a minute adrift as Jai Vernon-McGuigan, back after a six month lay off due to injury, was comprehensively claiming the runners up spot. With Ben Costello(4) and Mike Bride(8) the quartet retained the HM Finney cup with panache.U17 Warren Turner might well have joined the elite club of winners. Miscalculating the fast start he found himself grafting hard to overtake a phalanx of harriers eventually destroying them all but Sharp of Liverpool who had quietly got himself beyond reach. Warren will learn from that lesson. Others in the fray on the day were the U13 Barnsley girls Alex(12) and Megan(15), U13 Joe Martin(21), U15s Daniel Wright(15) and Georgina Hannaway(12), U17 Alicia Burke(13), Senior Women Lisa Gawthorne(19)and Vicki Jones((29) plus a loyal squad of Senior Men, Greg Callaghan(48), Robbie Wood(69), John Dobie(105) and Danny Gilbody(107).
Merseyside Results 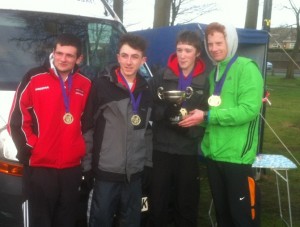 ← Courtney back in shape
LPS U17`s rounding into form →