At one time they were Liverpool’s leading group. They topped the bills above the Beatles. But theirs was the tragic story of the local legend that never 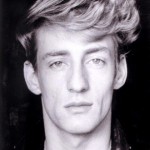 Rory Storm was called ‘the Golden Boy’ and ‘Mr Showmanship.’ Forty plus years after his death, people in Liverpool still talk of him with awe and respect.

His real name was Alan Caldwell. Apart from loving music, he had a passion for sport, particularly athletics.

Rory was a consummate artist who believed in ‘the show must go on’ in any circumstance. Examples of his determination to perform despite problems are apparent in the following stories.

I discussed Rory with Rod Punt, who was formerly known as Steve Day, the original leader of groups such as Wump & His Werbles and Steve Day & the Drifters.

He told me: “I first met Rory (Alan Caldwell) when we were about 14 years old. I lived on the Wirral and he lived in Liverpool – but I used to run cross-country for Wallasey Athletic Club and he ran for the Pembroke Harriers. After races the coaches used to stop on the way home at a pub or cafe and 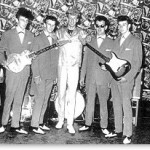 Rory used to get a guitar out and strum it. The next time I saw him was at Butlins and we remembered each other. What impressed me about Rory Storm & the Hurricanes was how stylish they were in their smart suits. We became very good friends over the years – I even remember the original line-up: Rory Storm, Ty Brian, Lou Walters, Johnny Guitar and Ringo.

“The one funny story I remember was at the Orrell Park Ballroom. Groups used to double up on jobs in those days and we had been on first. We were getting ready to move on to Litherland Town Hall when Rory turned up. He had the biggest gumboil I had ever seen. His face was in a real mess. So I said to him, ‘You’re not going on stage like that, are you?’ He promptly pulled out a black velvet hood. It had slits for his eyes and for his mouth. He put it on and tied the strings round his neck – he looked like Ned Kelly. What a trouper!”

I remember Johnny Guitar telling me a great story about Rory. Apparently, Rory came to his house one day and asked him if he’d go down to town with him as he was going to buy a car. They walked from Old Swan to Scotland Road, a distance of several miles. Yes, walked! They entered the Vauxhall dealer’s show rooms and Rory pulled out over £800 in cash and bought his pink Vauxhall Cresta. Johnny was gobsmacked: “To think, all that cash and he was too meant to pay some bus fare!”

A friend of Rory’s named Arthur Davies told me, “I’ve got a little story that happened at Bankfield House Youth club in Garston, about 1965. I was in the dressing room with the Hurricanes and the youth leader came in to tell Rory that all the stage lighting had gone and they couldn’t get it back on. Rory was gutted. Then someone walked in with a big torch. ‘That’ll do,’ Rory stuttered. I was elected to follow him, with the makeshift spotlight. I was knackered trying to keep up with him. He still gave a show to remember to the watching crowd and at the end of the night Johnny Guitar gave me a lift home in his Jag. My only regret was I forgot to ask Rory for his autograph.”

When I discussed Rory with another Mersey musician, Ken ‘Dixie’ Dean, he told me: “I first met Rory when I was playing with my group the Kruzads at 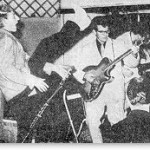 the Birkdale Hotel. We got to be good mates. The next day I played football for the Mersey Beat X1 and was a regular after that game. We played the Cavern Kickers. The team at the time was Joey Bowers (Fourmost), Billy Kinsley (Merseybeats), Mike Gregory (Escorts), Vince Earl (Talismen), Ty Hardin (Hurricanes), Lee Baron, Freddie Starr, Shane Fenton, Eddie Amoo (Chants), Rory and myself, Tony Kay and other guest stars.

“Rory was not only a good footballer he was a very good runner, swimmer and skater. We went to the ice rink about twice a week. He tried to teach me but I was terrible! He also took me to Melwood to watch Liverpool football team training. He had a big picture in his house of him training with the team.

“When I finished playing with my group we often met in the Blue Angel. On the way home, before dropping me off, he would go to the Daily Post & Echo loading bay and get the morning paper right off the press.

“He was well liked by everybody, it was funny at times to see him arguing with Freddie Starr as they both stammered and stuttered – but it was all in fun.

“His mother and father were lovely people. It was sad when his dad died. I was in Spain at the time and told him that I was very sorry, as I would have come back for the funeral if I’d known.

“I’d also had the sad task of carrying Rory from the hearse to the cremation with Johnny Guitar, Vince Earl, Lee Baron and Ty Brian.”

It is interesting to note that Rory had the impediment of a very bad stutter when he spoke, yet was able to sing perfectly on stage without the stutter.

The above article by Bill Harry

My first recollection of Alan Caldwell is of a young man fair haired lad surging past me and several other runners over the last half mile of the Waterloo road Race in November 1956, sing the song “Rock around the Clock” at the top of his voice. 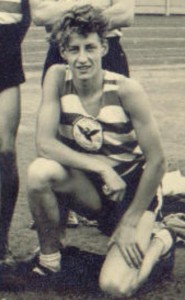 It was the late 50s with the emergence of rock and roll and all that went with it. I suppose it was an early indicator of Alan’s inclination towards a “rock and roll” lifestyle he eventually adopted.

Later in that 1956/57 Cross Country season I got to know him on the trip to London in February for the National Cross Country Championships at Parliament Hill Fields. Liverpool Harriers, Pembroke, Sefton and Wirral clubs had between them reserved a carriage for their exclusive use on the train from Lime Street to Euston on the Saturday morning of the race and there was a great atmosphere between the members of the clubs on the journey down. Alan Caldwell had brought a guitar with him on the trip although he had no idea how to play it.

After the Championship we split into smaller groups and spent the evening in London before catching the midnight train back to Liverpool. I was with a group that included Geoff Warriner of Pembroke and Rod Jones of Wirral and we happened to share the same compartment with Alan Caldwell who was clutching his guitar. In the ensuring conversation he discovered that I could play the guitar, so the journey back home was spent teaching Alan his first cords. Skiffle was also very popular at the time. It was a simple way into playing and singing so the compartment echoed to the sounds “Rock Island Line” and “Bring a little water Sylvie” all the way back to Liverpool. From then I suppose we were pals.

I liked the lad and I suppose it was our shared love of music that forged a link between us. I remember he formed a Skiffle group and was allowed to play at one of Pembroke’s club dances at a hall somewhere in Norris Green. It was probably because of his wild and zany behaviour and his stammer that some people regarded him as a figure of fun. I never did! He was just a young man doing something that he was drawn to; although as he realised later on, he was vulnerable.

I was married in 1966 and lived in Aigburth for a couple of years right on the edge of Sefton Park where I did all my training. I had not seen Alan for 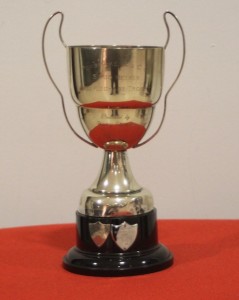 sometime but one summer’s evening while running around the Park a pink Vauxhall Cresta car drew up alongside me and stopped and out stepped Alan! He greeted me with great warmth and we had a good chat; me in my vest and shorts and him in his rock and roll gear and cowboy boots. That was the last time I remember seeing him. I never did think of him as Rory Storm; he was always Alan Caldwell to me.