You are here: Home > Lisa sails to a PB at Southport

Lisa sails to a PB at Southport

The Northern Relays were at Leigh and Liverpool Pembroke Sefton Under 17 men got a good start to the winter season by taking 14th spot in the three lap race. Ryan Blackwell (10.39) ran strong on the lead off leg and James Loftus(11.04) and Jonathan Bride(12.03) showed they are also in good form. The Senior men raced over 6 laps with over a 100 clubs vying for honours. Ben Costello`s first lap left the club in 37th spot in 19.53. He was followed by Sean Kirkbride(20.18) and a very powerful effort from Alistair Nelson(19.42). Positions fluctuated as Kyle Nicholls(21.31),
Warren Turner(20.52) and Rob Parkinson(22.27) completed in 36th place, a very creditable performance indeed as all of the team members were Under 20 Juniors. The `young guns’ have arrived on the senior scene and will make an even bigger impact as the season wears on.

Meanwhile at Southport the club`s leading ladies, Kirsty Longley and Lisa Gawthorne, were tackling the Intersport DW 10K race. This is a multi-terrain course including four kilometres on the beach and the rest on the promenade and sea wall. Kirsty, as usual, was magnificent striding to a clear female win and 10th overall in 38.54. The real breakthrough though came from Lisa who recorded 42.37 and took over a minute off her personal best. She was 24th overall but a joyful second to Kirsty in the women`s race. This will give her confidence a huge boost and on a more even course she will be looking to join the elite sub-40 club. 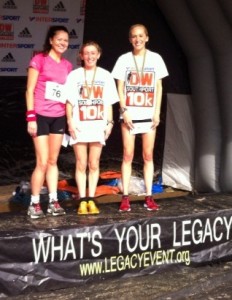