Paul Cotterill, a member of Liverpool Pembroke Sefton, has taken on the responsibility for the Saturday morning Park Run at Edge Hill University. These park runs are a major feature 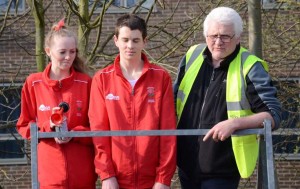 throughout the country and attract runners of all ages and abilities who simply want to stretch their legs or attempt a personal best at the 5K distance. Paul has measured out a very attractive course of one small and two large laps that snake around the increasingly attractive landscaped campus.

The race was started by LPS`s two recent English School`s cross country internationals, Rosie Johnson and Daniel Slater. Daniel could obviously not resist the temptation and followed the immediate charge. The initial event had attracted some 118 runners and Steve Makin of the Wigan club took a firm grip of the proceedings to come home well clear in 17.13. Slater ran comfortably throughout and finished fourth in 18.19. Jack Crook was 5th in 19.22 and Danny Gilbody (8) recorded 19.41. Other LPS finishers were young Fran Price(32 in 23.06) and Matt Slater(59 in 25.40).

The event will certainly gather force as it rolls on. Edge Hill University provides an outstanding environment for such races. Paul`s team of volunteer officials and marshals deserve a huge vote of thanks for such a splendid innovation.

At the Mid-Lancashire League Cross Country Awards evening the club`s queen of distance running, Kirsty Longley, stepped up to collect 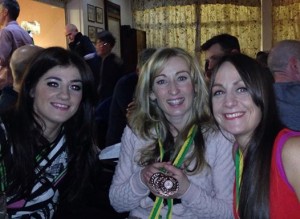 Kirsty Longley shows off her awards

the season`s top overall female award plus the Over 35 title. The popular Kirsty has proved an inspiration for females of all ages in the club and will make an even bigger impression as she now takes on an additional coaching responsibility.

Kirsty will be delighted that her club mate, Lisa Gawthorne, is doing extremely well on the road scene. At the Cheshire 10K she finished 80th overall out of a large field and was 12th

Female. However, the eye-catching news is that she has gone through the 40 minute barrier for the first time. She ran an astonishing 38.54 which is 1.38 better than her previous best. There are plenty of men who would be delighted with that clocking.

Underway at the first Parkun at Edge Hill 29th March 2014