You are here: Home > Amelia soars to new heights

The Northern Indoor Championships at Sheffield herald the start of the 2015 serious stuff for aspiring track and field athletes. After a long quiet period Liverpool Pembroke Sefton`s High Jump star, Amelia McLaughlin,  is back with a bang. Now consistently over 1.80m in training she not unexpectedly took the title with 1.77m, well clear of any opposition. Her improving form has been recognised by England Athletics and this coming weekend she is selected to compete in a specialist High jump competition in Hustopece in the Czech Republic, a recognition of her of her future development as an international athlete.

There were additionally two other silver medalists at Sheffield. In the Senior Men`s 400m Nathan Hilton recorded a smart 48.92 with colleague Danny Higham fourth on 49.60. Other LPS athletes on show were Sean Bosman (52.10) and Wayne Ashall (52.60). Ed Latimer(51.65) ran superbly in the Under 17 final to also mount the rostrum for silver. Joe Milton, on his way back, ran a heat time of 52.07. There used to be a national outdoor relay title for 4 x 400m. If it were still around the talented LPS contingent would look likely title chasers. 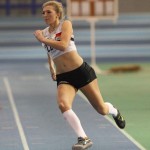 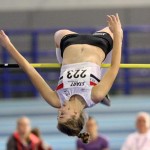 Amelia McLaughlin in action at Sheffield 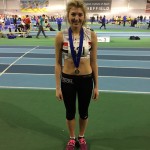