Kai Finch & Owen Southern were the club’s only medallists at this year’s northern track & field championships held at Leigh Sports Arena. Over the weekend. Kai (1.90m) & Owen (1.75m) took silver & bronze in the U17 men’s high jump. Fellow high jumper, Sandy Clarkson, narrowly missed out on a medal finishing 4th in the U15 Boys event (1.55m). Other athletes with 4th place finishes were Marcus Bathie U17M 100m hurdles (16.22 sec.) and Bill Steel (U15B), whose javelin throw of 31.82m was below his best, but he also acquitted himself well in the long jump finishing 5th (5.40m)
Erin Birchall managed to win Pool B in the U17W long jump competition with a leap of 5.03m, but it was not sufficient to get her a medal. Martha Simms jumped 4.42m in the U15 Girl’s competition, but as with Erin can take heart that this is the first year in their respective age groups.
Ciaran Scroggie (U17M) found the standards high in his sprint heats and his times of 12.6 sec.(100m) and 24.66 sec. (200m)were not fast enough to take him through to the final. The same was true for Lauren Lewis whose 200m time of 26.91 sec. could only get her 4th place in her heat, while her run in the 80m hurdles final (15.03 sec.) showed that she still has much work to do in this event in order to compete at the highest level. Abigael Bamber (U15G) who ran 13.71 sec in her 100m heat also did not qualify for the final, but can be pleased with her run in the 75m hurdles (12.71 sec) The sole middle distance runner, Jacob Slater (U13B) finished 8th in his 800m race, no doubt disappointed that his favourite distance, 1500m, was surprisingly not on the programme. However, his time of 2:23.44 was a AAA level 2 standard which highlighted the quality of the field.
Undoubtedly, one of the best performances over the weekend at Leigh came from 13 year old Hope Kennedy, who competed in the U15 girl’s javelin. She was visibly the smallest of the 19 competitors, but her throw of 27.17 metres improved her pb by over 3 metres and enabled her to finish in 6th place.
Over the border at Wrexham, Jenny Pyatt took part in the Welsh championships. Although, she was well below par in the U20 women’s discus, her best throw of 39.14 metres was sufficient to see off the other competitors and claim gold. 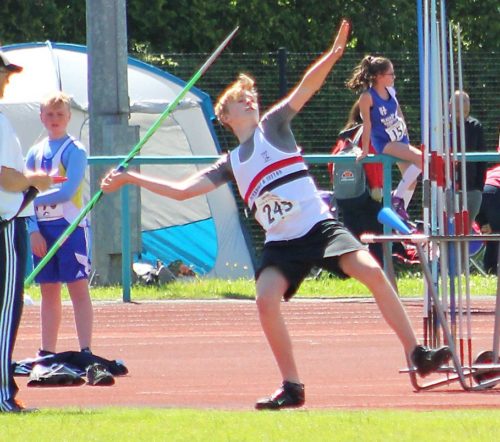 Bill Steel in action at NA Champs at Leigh