A number of Liverpool Pembroke & Sefton athletes made the short journey to Litherland Sports Park to compete in one of the final track & field meetings of the season.

It was the male high jumpers who stole the show, with all 3 setting new personal best performers. Kai Finch broke the 2 metre barrier for only the second time in 12 months, clearing 2.03m to win the U17 boys event. Owen Southern took silver in the same event with a leap of 1.88m, while Sandy Clarkson raised his bar to 1.66m in the U15 event.

Hope Kennedy is on a rich run of form at present and improved her pb from two weeks ago to throw 27.60m in the U15 javelin. Although performing below her best, Lauren Lewis still managed first place in both the 80m hurdles (13.0) and 200 metres (27.3) at U17 level. Marcus Bathie continues to improve in the 100m hurdles & his victory in a time of 15.9 sec was his fastest ever.

At U20 level, Billy Matthews, knocked over half a second off his 400m time when taking second place with a time of 50.8 sec. Senior, Danny Higham ran his fastest time of the season winning the 200 metre race in 23.1 sec. 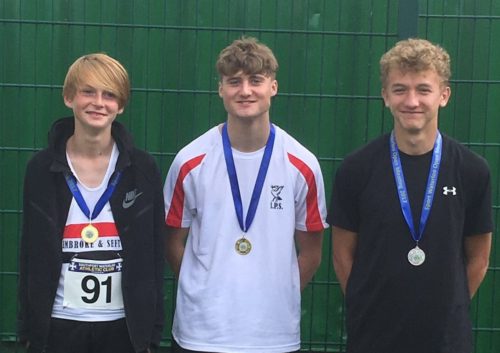