You are here: Home > Dan wins bronze on gold coast.

When Dan Slater first joined LPS five years ago it was with the intention of improving his running skills. Now at the age of 18 he just won a bronze medal at the World Junior triathlon Championships on Australia’s Gold coast.
Out of 62 competitors who finished the junior event, Dan finished a very creditable 22nd, four places behind his friend and team mate Matt Willis. However, it was in the mixed relay event that Dan won his medal. This time Dan & Matt, teamed up with Olivier Mathias and Sophie Coldwell. The event consisted of a 250 metres swim, 7K bike ride and a 1500m run and although initially placed 4th, the New Zealand team were disqualified in 2nd place, so GB were able to claim the bronze.
Dan had a fantastic time in Australia and couldn’t have wished for a better end to the triathlon season. He will now have to focus more on his studies as he begins life at Cambridge University.
Wally Bridson 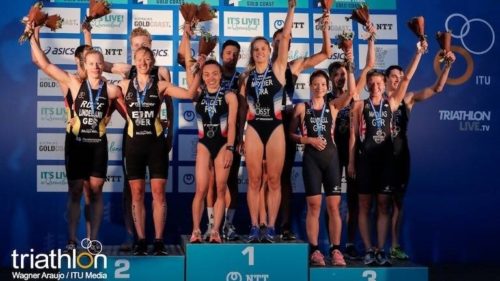