You are here: Home > The Making of an Olympian

The Making of an Olympian

You The Making of an Olympian is the title of a book currently published by New Generation Publishing. It is the autobiography of Tom Farrell the talented Liverpool Harrier who competed at both the Melbourne Olympics in 1956 and the following Olympics in Rome.

Farrell was something of an all-round sportsman and could well have excelled at football but was attracted to athletics while at the Liverpool Collegiate School, winning the Victor Ludorum prize that involved excellence at several events. By 1951, when he left school, he was good enough to take the Northern Junior titles at both 440 yards (51.6) and Long Jump(20ft 10ins).

A two year spell as a National Serviceman in the RAF followed in which he rose to be a Pilot Officer, meanwhile collecting the service 440 yards Hurdles championship. He was now specialising in what was known as the `killer event’. After leaving the RAF he went on to further success and representative honours while teacher training at Loughborough College,coached throughout by the redoubtable Denis Watts

The 1956 Olympics was looming and although not a first choice he made the team along with fellow Harrier, the sprinter Ken Box. On the track, constructed inside the stunning Melbourne Cricket Ground, he was up against some very fast competitors and failed to make it through his heat. Subsequently, looking at the basic speed of successful one-lap hurdlers he realised he would never achieve top honours and switched to the 800 metres. Again, he did enough toqualify for Rome but that event was brimming with emerging talent and he succumbed in the quarter final, finishing fifth, to the great New Zealander, Peter Snell.

What is extraordinary about this book is the social context in which is set. WI Loader in the classic Testament of a Runner provides us with an evocative record of sprinting in the 1930s. In my opinion Farrell does an equally good job for the 1950s. Here individuals still had to fit training into career demands, cope with primitive facilities and limited access to quality coaching. The reader will be amused, for example, at Farrell`s inability to even locate proper hurdles improvising with folding chairs plus doing interval training on a patch of tarmac at the rear of his home in Kremlin Drive, Stoneycroft!

The narrative throughout is suffused with his deep Christian views and his admiration for Eric Liddell, the hero, one will recall, of Chariots of Fire. After a stint of local teaching he followed his real calling and went on to become a full time minister.

Whether the reader has a local, national or even international interest this book is a must. I can`t think of anything as good that captures that particular decade, just prior to the growth of facilities and the incipient rise of professionalism. Farrell is one of the last great `Corinthians’. Treat The Making of an Olympian with respect. Charles Gains 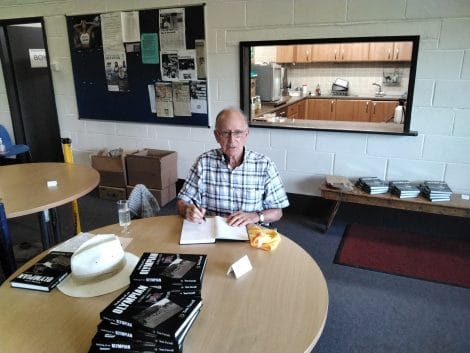 ← Evergreen Kirsty Longley gets another England call up
Kirsty moves to 4th on UK All Time List. →