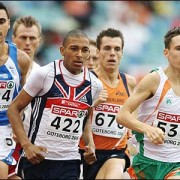 European Championships Gothenburg Michael Rimmer has had the most fantastic year of his athletic life. At the beginning of 2006 he was a relatively promising but unknown athlete. In August he had reached the final of the European 800m Championships. On the way he had chopped 3 seconds off his personal best time, claimed the national […]