You are here: Home > Another stunning run from Jai

Another stunning run from Jai

Another stunning run from Jai 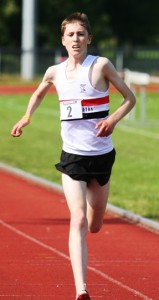 Jai Vernon-McGuigan`s cross country season came to a close at Glasgow’s Rouken Glen. The LPS athlete, representing the North of England, took on some of the nation`s best in the traditional Home Countries international. Barely expected to finish in the first dozen or so of the Under 20 race he astounded everybody with yet another gutsy run and a stunning sixth spot. First Northern vest home will be very satisfying and surely a prelude to a full international one next season.

English Schools
While Jai was leading his region some 300 miles south the English Schools Cross Country Championships were being held at Ilton in Somerset and Rosie Johnson was replicating this performance for the Merseyside team in the Junior Girls race. Her tenacity brought her home fifteenth and with the additional pleasure of a team bronze medal to celebrate the occasion. At Intermediate level Ryan Blackwell(Lancs) had his usual tussle with James Grundy(Mersey) the positions running out at 81st to 86th this time. In the Junior Boy’s race Daniel Wright (Mersey) was 270th, whilst Georgie Hannaway (242nd) exceeded expectations by finishing 4th counter for Merseyside Intermediate girls, despite starting 7th in the pen.

Kirsty half marathon debut
On domestic territory the Liverpool Half Marathon attracted 2000 runners. Kirsty Longley marked her debut at that distance with 77th overall and third female to finish. Her time was an extremely good 83.45. Inspiring weekends are becoming a familiar feature to the Edge Hill University based squad.

← Jack Betney
Jai clipped and out →