You are here: Home > Jai clipped and out

Jai clipped and out

The Northern 12 Stage Championships was at the splendid setting of Sefton Park. Jai Vernon-McGuigan was the nominated Liverpool

Pembroke Sefton lead off runner. Given his recent form something special was expected but instead he was accidentally clipped on the heel within a few hundred yards, out of the race with a bad grazing and in the hands of the medical support team within minutes. With 11 further runners standing by this was a cruel blow but officials acted with alacrity and permitted the club to continue on the second leg and thereafter in order to obtain times if nothing else. This allowed the club`s European silver medallist 800m star Michael Rimmer to race on the second stage. Although not training for anything like 4K his smooth talent showed as he recorded 11.24 which made him 7th fastest of the day on the short lap. Ben Costello followed on the long stint (7.6k) with a useful 24.35 to hand over to another track exponent 400m specialist Harry Doran who recorded 12.13, yet again a respectable time.

Among further short leg offerings a delighted Mike Bride scooted around in 12.44 and a far from fit Rob Bland recorded 13.40. Chris Pedder(17.05), Robbie Wood(15.17) also competed. A sharp Ian Roberts took only 25.21 for the double circuit while reliable vet, Bernie Murphy, ran 26.34. Graham Cairns(28.10), and Greg Callaghan(28.59) were in support. A somewhat disappointing day for the club with no team result but several individual efforts raised spirits. At the end a recovering Jai Vernon-McGuigan was even wearing a smile.  Results 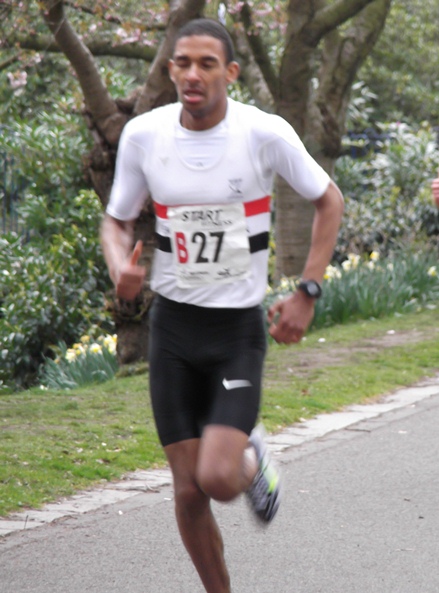 ← Another stunning run from Jai
The irresistible rise of Rosie →