You are here: Home > Rosie delivers

Rosie Johnson is clearly not fazed by the big occasion. Representing the North West in the Virgin Mini London Marathon, a prelude to the big event, she came home a highly creditable 6th in the U15 Girls event. Up against some already high profile athletes this was an amazing debut at a top level event. The icing on the cake was the fastest time in the North West including girls who were two years older. In the premier 26 mile race Zoe Tarrach recorded 3.14.02, another great performance placing her 141st in her age group.

The Liverpool Harriers Open Meet at Wavertree provided the usual opportunity for athletes to stretch their early season legs. None did more so than young Lauren Lewis in the Year 4/5 girls events. She recorded two breathtaking times for 75m(11.3) and 150m(22.5) leaving her opponents some distance adrift. The girls were out in force and among some sharp performances Year 6 Meg Barnsley ran a 2.03.0 600m while sister Alex scorched to a 11.5 100m and 23.3 150m. Evelyn Smalley led the long jumpers in years 8/9 with a highly satisfactory 4.26m. Junior Emma Givens was as smooth as usual with a 16.5 100m hurdles. A string of other girls we will surely hear about also announced their intentions.

On the male side there were useful sprint results from Rob Orkney(100m in 11.6), Andrew Williams(200m in 23.3) and Nathan Hilton(400m in 50.4). In the latter event 43 year old Matt Thompson raced to an excellent 56.5 and has a private bet with Club Chairman, that he will duck under 2 minutes for the 800m this season. If he does he will be amongst the best vets in the country. While there were no outstanding performances elsewhere there was a lot of quiet progress. Jonathan Bride, for example, ran a very encouraging U17 800m in 2.14.3 while older brother Mike tackled his first mile race in 4.47.5. John, the father of the Brides, pronounced himself satisfied. Yr 7 Danny Wright also showed form with a respectable 4.48.1 1500m and immediately declared his intention of ducking under 4.40 in the months ahead. It was a day like that, full of optimism for the coming season.

Over in Sheffield, we hear that 400m specialists Wayne Ashall(49.7) and Adam Thompson(50.3) were also looking good. 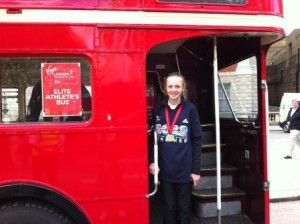 ← The irresistible rise of Rosie
Young Athletes Newsletter May 2012 →