You are here: Home > J.S.Lubbock Trophy 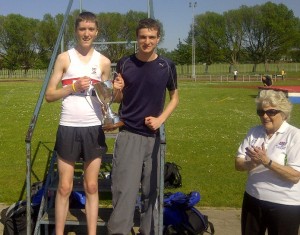 For those younger members who perhaps don’t know the name Stan Lubbock, here is a brief history of the man.

Stan Lubbock joined Sefton Harriers in July 1921 and although never an athlete of note he became a dependable official of the club taking on many roles during his 58 years of membership. He was club secretary from 1925-28 then again from 1934-50. From 1955-64 he was the club treasurer then from 1967 until his death in 1979 he was president of the club.
During his long and distinguished career is also became President of the following organisations, English Cross Country Union, North of England AA, North of England Cross Country, Lancashire County AA, Lancashire Cross Country, West Lancs Cross Country Association and the Liverpool & District Cross Country Union.
Stan was an active official in local and National athletics from the mid 1920s onwards only interrupted by the war. Upon his return from active service in 1946, Stan along with a few other local athletics enthusiast helped re-start local athletics competitions, he was a track judge at the 1948 Olympics and continued to be a regular at athletics events until ill health in the late 1970s. Stan died in January 1979, the J.S Lubbock trophy was purchased shortly after by voluntary donations made by members of the athletics community locally and nationally. 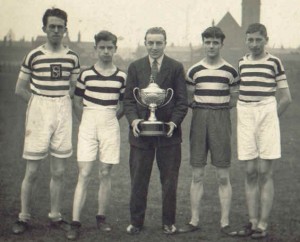 Stan Lubbock (center) with the Sefton Harriers youth team of 1928