You are here: Home > On the road with Kirsty, Lisa and Toby

On the road with Kirsty, Lisa and Toby

The gap between the cross country and track and field season presents a relaxed opportunity for distance runners to stretch their legs over various road distances. Liverpool Pembroke Sefton`s most loyal senior, Kirsty Longley, was in action in the Halton Run-the-Bridge 5 miler. Having already in the 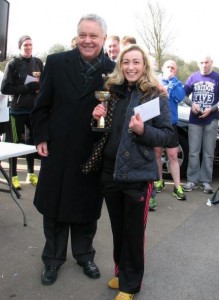 last 6 months picked up an England O35 vest and recently representing the North in an international match, her confidence is at a very high level. She was completely relaxed here to such a degree she was at conversational pace not fully realising that her 20th overall spot and comfortable leading lady position in 29.18 was a club record for the distance. She remains an example of enthusiasm and commitment all runners should seek to emulate.
Team mate Lisa Gawthorne shares a similar philosophy although a busy professional career takes her all over Europe. But she was back in time to take a third spot in the Blackpool Gold-den-Girls 10K race in a very respectable 44.49. She followed this up with a brilliant first lady position in the Llandudno 5K in 20.14. The club females are certainly setting the pace. However, there was one significant male performance from the Easter weekend. It came from Toby Loveridge who tackled the Caldervale 10 miler. Hs first crack at the distance saw him take second a mere 8 seconds adrift of the winner in the decent time of 55.19. His potential remains immense.

Over on the fells John Dobie and Robbie Wood made the short trip to Horwich for the Rivington Pike for fell race. Held on Easter Saturday since 1892 this a popular Cat A short fell race, over 3 miles with a climb from the gates at Lever park up to the Beacon on the summit and back down. Robbie was 117 and first V/55 John Dobie was 226 and second V/65