You are here: Home > New Course Record for Kirsty at Halewood 5k

Making a last minute decision to compete Kirsty Longley was rewarded with a new course record of 17.40 at the Halewood 5k on Saturday  6th April. In a good standard field Kirsty came home 23rd closely followed by Liverpool Harrier Rachael Burns who was also inside the old record. Only 10 seconds outside Kirsty’s  pb for 5k on the road, she like many others found the fast Halewood course to her liking. Six runners dipped below 16 minutes and 55 finished within 20 minutes.
Kieran McGing also making his first appearance at this event was 37th in 18.42, followed by John Halson (v/50) a seasoned Halewood campaigner 44th in 19.02, next was John Dobie (V/65)  80th in 23.00 closely followed by the Barnsley sisters. Alexandra 82nd in 23.11 and Megan 84th in 23.29.  Results 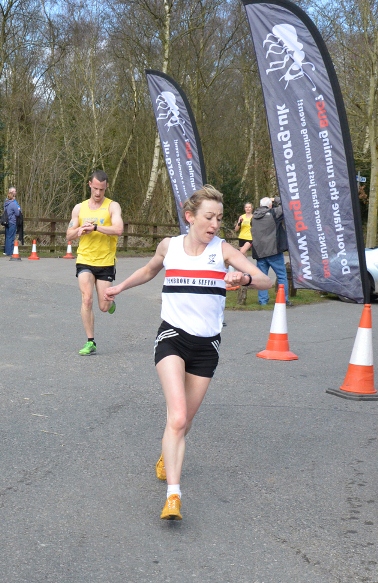