You are here: Home > Rosie shines and Graeme rules

Traditionally the London Marathon is preceded by mini-marathons for younger age groups. Rosie Johnson`s winter record, culminating in an English international schools appearance led to an invitation to compete in the 3 mile event. There is terrific competition in her Under 15 category but again she delivered with an outstanding third place. This will almost certainly lead to another invitation to attend the St Mary`s University summer school in August reserved for the country`s best prospects. 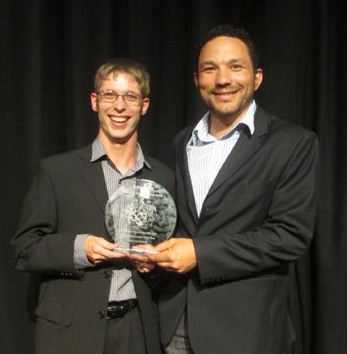 The weekend saw the annual West Lancashire Sports Award evening at Edge Hill University. The top title of Senior Sports Personality of the year went Graeme Ballard, silver medallist in the Paralympic Games in last summer`s Olympics. He successfully beat off competition from outstanding nominations from other sports. Both he, his family and coach Tabo Huntley were overjoyed at the result and warm reception from an appreciative gathering. Another Liverpool Pembroke Sefton athlete, Anna Hulme, was nominated for Junior Sports Personality of the year for her triathlon exploits and finished a worthy runner-up.

Wavertree was the venue for Liverpool Harriers Open Throws and Jumps meeting. Club high jumpers produced some encouraging results. Amelia McLaughlin is clearly back to her best with a 1.69m clearance cementing her position as 4th ranked nationally at Under 17. Senior Billy Williams also had a big boost as he went clear at 1.90m, a height he hasn`t achieved for a couple of years. Both look good for the summer programme. Two other younger athletes at U15 who additionally show promise are Owen Southern(1.35m) and Hannah Wills(1.35m). Of the throwers Mark Hynd impressed with a mighty 37.05m in the Discus while Suzanne Woodward (36.82m) and Rachel Hutchinson(33.02m) will be satisfied with their respective Hammer throws. Finally Evelyn Smalley continues to produce a string of personal bests, this time a decent Long Jump of 4.44m.

← Lauren quick at Wavertree
London Marathon Round Up →