You are here: Home > Northern Medals

The Northern Senior and Junior Track and Field Championships at Manchester’s Sport City provided Liverpool Pembroke Sefton with a trio of medals. The club’s highly regarded sprint squad was again prominent, even in the appalling conditions. Nathan Hilton controlled his 400m heat performance easing through to the final with 49.81 with team mate Danny Higham also qualifying with a more ambitious heat win of 48.89. The final was swift but the two Edge Hill students were never out of the frame with Nathan(48.85) collecting the silver medal and Danny the bronze(49.42). Video of Final
In the parallel Under 20 race Jesse Roberts(51.69) and Andrew Williams(52.86) were 6th and 7th. Ruth Doran, still edging towards 11metres, was 5th in the Senior Shot with 10.91m. Video of Final

It is easy to run out of superlatives when describing Kirsty Longley. Her career is littered with outstanding cross country and road running success but here she tackled the track 5000 metres. An understandably somewhat cautious approach left her with the difficult task of catching a Scunthorpe girl but her unfailing courage saw her storm through to a silver medal in 17.36.37, a mere couple of seconds adrift of the winner. The time takes her to second in the UK in the Over 35 age group. Northern Athletics Results 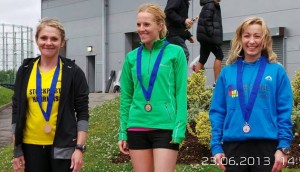