You are here: Home > LPS athletes jump to success

It was another successful day for LPS athletes at Lancaster in the Mid-lancs league. The girls won their 3rd consecutive match (201) ahead of Lancaster & Morecambe (125.5), whilst the boys (159)finished 2nd, behind Lancaster & Morecambe (239). Dave McComb’s high jump squad excelled themselves, winning all 6 age groups that they competed in. The outstanding performance came from U13B Kai Finch who leaped to victory with 1.51m, a grade 1 performance. Mike Dandy’s U13 sprint squad continue to show their promise with Lauren Ramsey the latest to set a PB in winning her heat of the 100m in 13.6, also a grade 1 performance. Joe Milton(Schools 300m champion) went head to head with Morgan Greaves-Thomas(schools 100m champion)in the U15 Boys 200m race. Joe just edged it (23.5), with Morgan 2nd in in 23.7 There were a number of successes amongst the throwers with Ben Harding (34.25m)U15B Javelin, Ruth Doran SW Shot (10.98m), Rachel Hutchinson SW Hammer (35.95m)and Amy Aitchison SW Javelin (26.73m), all winning their events. Best performance from the middle distance runners came from Mike Wilson who won the SM 3K in 3:39.8

Sport in the Port
Fresh from her victory last weekend in the 10K tunnel run, Kirsty Longley chose the ‘Sport in the Port’ races at Ellesmere Port to again test her stamina. She was not disappointed and was first lady home in 37.00 mins.Club colleague, Lisa Gawthorne, chose to run the 5K at the same venue and not only won the ladies race, but was 6th home overall. Lisa continues to grow in confidence and her regular training schedule is beginning to pay dividends.

England Athletics U23 Championships
Toby Loveridge was the sole club representative at the EA championships at Bedford over the weekend. After successfully negotiating the heats of the U23 Men’s 1500m on Saturday he then set a new PB time of 3:52.61 in finishing 8th in the final on Sunday. 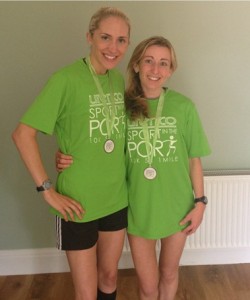