You are here: Home > A superb season for Joe Milton

A superb season for Joe Milton 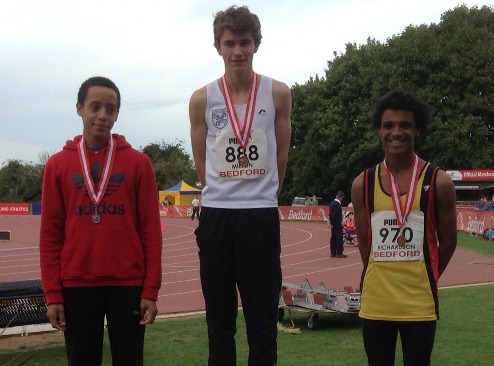 Joe Milton with his gold medal

Three members of Liverpool Pembroke Sefton duly made the long trip to Bedford for the England Athletic Championships for Under 15 and Under 17`s with the trio all having realistic medal prospects. Joe Milton has already had a truly outstanding season and has never been headed in his favourite 300m event. With controlled heat times of 37.39 and 36.68 he faced the final with only Chenna Okoh of the Dacorum club looking his most likely challenger. However, he clearly had that extra edge in the long straight and dipped to victory in 36.29. He is currently unchallenged king of this sustained sprint. If there were international possibilities for U15`s he would be an automatic choice.

Amelia McLaughlin has had a bitty sort of year but having recently posted a personal best of 1.76m  was clearly in with a chance in the U17 High Jump. She was up against the extremely formidable Morgan Lake of Windsor who was in a  class of her own with a 1.88m clearance. Amelia hung in contention with the rest of the competition and her 1.70m was good enough for a bronze medal. A hard winter`s training faces her but she now has the realistic prospect of joining the elite 1.80m plus group next year.

Another of LPS stars, U17 Rosie Johnson, although not 100% fit, is still regarded as a fearsome competitor. In a truly messy race where no one was prepared to take a grip of things Rosie was outsprinted in the final 50m and had to accept a 4th spot in what for her was a disappointing time of 4.43.17. Nevertheless, the last 12 months has brought an English School`s title plus international vests at both cross country and track and field so there is still much to be delighted with her year.

In the Diamond League meeting in Zurich Michael Rimmer faced some of the world’s best 800m specialists. Gradually recovering form he was clearly relieved to finish 6th in 1.45.34 just ahead of arch rival Andrew Osagie (1.45.80). The target for 2014 will be the European Championships where he has medalled before and the Commonwealth Games in Glasgow.

As an extraordinary season for LPS draws to a close the early September UK rankings show that no fewer than eight members are among the country’s best. Joe Milton, of course, is Number 1 with a 300m in 35.70. Michael Rimmer holds on to a 800m Number 2 spot with 1.44.97 and an unexpected High Jump leap of 1.51m for U13 Jade Murphy also has her at joint second in the UK. Rosie Johnson clocks in at 1500m with 4.25.11 and third placing. Amelia McLaughlin is 4th in her event (1.76m). An additional emerging talent is U13 Lauren Lewis, joint 6th in the 100m in 13.1 and Kai Finch a U13 high jumper whose 1.51m locks him at joint 8th. At joint 10th is U15 Morgan Greaves-Thomas with 100m in 11.4. If a further analysis was to take in top figures for the counties and North West plus veteran listings this figure could easily triple. Club Chair and historian, Charles Gains, argues this must be the club`s most successful campaign in over 120 years.

← Five medals at the Northern U15/17 Championships
Annual General Meeting →