You are here: Home > Pride Restored!

Liverpool Pembroke Sefton senior men have not done well in the local district cross country league for many years which is dominated by Liverpool Harriers. As teams turned up at Arrowe Park for the first match of the winter season there was no reason to think things would be any different this time around. However, LPS has been nurturing some young talent and as the race unfurled sufficient white vests in the leading group began to worry the Liverpool Harriers team management. After some successful road races Warren Turner looked in form and was clearly not worried by the very experienced company. His smooth style is useful over undulating terrain and he eased his way through to a third spot whilst still full of running. Alistair Nelson, back from Nottingham University for the weekend, battled for sixth placing and then the club had the sort of packing required in this sport as James Loftus(8), Ben Costello(9) and Ryan Blackwell(10) cruised home. It only remained for Ian Roberts doing a captain`s job to finish 15th and the club finished second within a handful of points of a worried Harriers squad. It looks like club 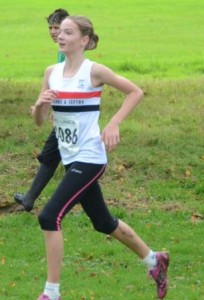 pride is being restored over the country. Also in attendance were Rob Parkinson(34), Danny Gilbody(40), Robby Wood(50), John Halson(60) and John Dobie(78).

The rest of the club were at the parallel Mid-Lancs meeting at Burnley’s Townley Park. Once again Kirsty Longley was able to stamp her authority on the senior women`s race and come home first. With Lisa Gawthorne(29), Lauren Wilson(36), Mackenzie(59) and Donna Hoban(100) LPS were sixth team but there is enough enthusiasm around to suggest this will be improved on next time. The Under 17 Men collected a solid third team result with Ben Singleton(5), Jonathan Bride(9), Chris Webber(18) and Joe Chadderton(19). In the U13s Francesca Price made a promising start to her career finishing 21st. Megan Barnsley’s result went missing but sister Alex was 35th and Maddy Firth-Cook 44th. Also at U13 Ross Harrison will have reason to be pleased with 7th in tough company backed up by Tom Dickinson(23) and Matthew Slater(35). There were two good individual performances at U15, Morag Molyneux on 5th and Daniel Slater 4th. Morag was backed by Jess Gonzalez-Green(18) and Daniel by Jack Crook(18) and Joe Marshall(48). At U11 Isabel Fearon was 21st and Megan Lovett 23rd while David Donnelly was 49th in his race. Results