You are here: Home > Matt sharp at Warrington

The Northern Athletics Road Relays Championships were once again held at Birchwood, Warrington. LPS were, sadly, only represented by Under 15 Boys and Senior Men. Matt Richardson easily claimed the best performance of the day. Always with the leaders in the U15`s he handed over in 9th spot in 10.18. Tom Jacques was fluent but his 11.22 slipped him to 15th. Joe Martin fought hard but 11.52 was only good for 21st spot. A decent result but the manner in which this squad ran was very encouraging.

The Senior Men struggled but, at the end were cheerful and optimistic. Sean Kirkbride (21.53) took the punishing first leg and was 81st at the takeover. Mark Wynne advanced to 67th with 21.29 which turned out to be the club fastest of the day. Jonathan Bride ran courageously to move to 57th with 21.56. Kyle Nicholls(21.50) edged up one spot and Peter Gaskell(21.55) another four to take LPS to 52. Late recruit Rob Parkinson was always going to have trouble over this distance but unselfishly ran a 24.07 lap to leave the club 61st overall. On Leg 1 Mike Bride had run an unsupported 24.26.

This was clearly a disappointing afternoon for the club`s senior males. On the plus side most can expect to run a lot quicker as serious training and racing kicks in during the winter months. 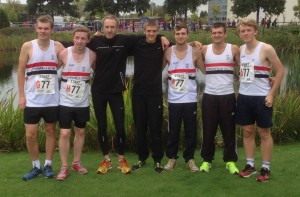 ← Silver ladies and bronze boys
Lisa and Mark at the seaside →