A busy track & field weekend saw LPS athletes spread over 3 county schools championships and the northern championships at Sports City.
At Sports City, 3 senior men qualified for the final of the 400m, with Danny Higham (48.78)taking silver & Harry Doran (48.94). At U20 level, Jenny Pyatt took silver in the Discus (39.37m), as did Evelyn Smalley (4.59m)in the long jump. James Loftus SM broke through the 16 min barrier for the first time running 15:54.84 in the 5K
Ella Barton was the club’s sole athlete in the U20 Greater Manchester schools championships at Stretford and she was rewarded with gold in both the 100m(12.68)and 200m (26.3)
Robin Park hosted the Lancashire schools events and there was a double gold in the long jump. Lauren Lewis (JG)jumped a new PB with 5.08m and Matt Ingram IB secured gold with 6.27m. Rob Ward won bronze in the same event (5.74m)despite being injured for much of the season. There was no stopping Elliot Jones & Ed Latimer who finished 1/2 in the U20M 100m, with Ed also claiming gold in the 400m event. Scarlet Whitfield won silver in the JG high jump.
Bebington Oval was the venue for the Merseyside schools championships where the club’s biggest medal haul took place. It was the high jumpers who dominated with Kai Finch IB (2.02m),Owen Southern JB (1.65m)& Imogen Ayres JG (1.45m)all claiming gold. Laura Fairclough IG won the hammer(32.95m)and took silver in the shot putt (9.20m), with brother Matthew claiming bronze in the JB javelin (21.45m). Both Alice Prescott (5.04m) & Erin Birchall(4.75m)set new PB’s in claiming silver & bronze in the JG long jump, with Erin also winning silver in 100m ‘B’ final (13.2).Alex Bunclark IG won 2 medals, taking silver in 300m hurdles (55.1)& bronze in the shot putt (8.91m), while Emily Brough was a comfortable winner in the 7G 1200 metres (3.55.7)
It was pleasing to see such a spread of medals over the different events and age groups. However, many youngsters will now have an agonising wait to see if they are selected for the prestigious English Schools Championships being held at Gateshead in July.
Wally Bridson 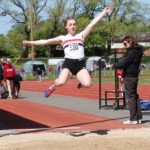 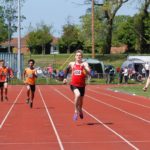 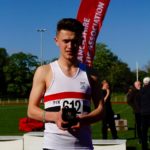 ← Great club result at home match
The phenomenon that is Kirsty →