Mid Cheshire 5K – 26th August
Club Captain Mark Wynne continued his rise up the national O/40 vets rankings with another PB of 16 min 13 secs for his 12th place and 2nd vet overall. Club mate Kirst Longley had a rare off day and finished down the field in 17.43 and will look to bounce straight back in the Salford 10K on 5th Sept.

England Athletics U/15 & U/17 Championships- Bedford (28th/29th)
High Jump Specialists Kai Finch and Owen Southern travelled with hopes of getting on the podiums but fell just short on the day .
Kai was disappointed with his best jump of 1 metre 91cm for 6th place , whilst Owen finished in 5th place with his 1 metre 76cm and both will no doubt carry on the progress they’ve made under coach Dave McComb.

Trafford Medal Meeting 29th Aug
Coach Phil Whitfield took 5 girls to the end of season medal meeting hosted by Trafford AC. Sadie McNulty won the U/15 High Jump with 1 metre 50cm and Scarlett Whitfield and Imogen Ayres (both 1 m.40) were in a tied battle that resulted in them being given joint third place. Alice Prescott finished just outside the medals in 4th place in her 300 metre race. 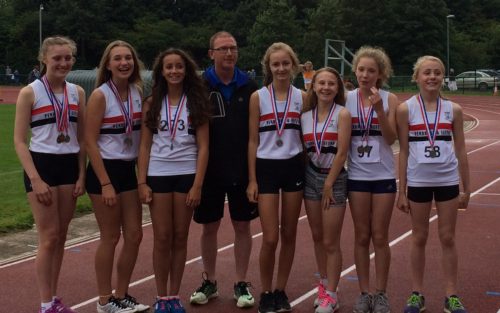