The irrepressible John Dobie goes from strength to strength in his new V/70 category, on Saturday 6th May he took part in the annual Satndstone Challenge. This is an event which runs the full length of the Standstone trail from Whitchurch in Shropshire to Frodsham in Cheshire, a distance of 34 miles of which 90% is off road and has 3,000 feet of climbing to negotiate along the route plus countless styles and kissing gates.

John had been training since Christmas for this event, building up his mileage and importantly getting long Sunday runs in sometime of over 4 hours in duration. The previous V/70 course record stood at 8 hours 19 minutes set in 2016 by Ian Hilditch of Helsby RC and this was John’s target, his training had been going well and he hoped to get close to the 6 hours 55 minutes he ran in 2015 when he was  just a boy of 68.

John set off at sub 7 hours pace but a nasty stumble early on saw him being detained by the first aid people at the midway who insisted on cleaning his wounds and bandaging him up before they would let him continue. This unexpected attention from the first aiders cost John about 15 minutes but he was able to thank them and press on undeterred. Calling upon all his years of experience John slowly but surly regained his composure and was soon passing those who ran past him while he was held up for repairs. At the final checkpoint and with only 5 miles left it was clear that if he could hold his form over the last 5 miles the sub 7 hours target was still on. John as you might expect held his form and maintained his focus up to the last stride and was rewarded with a time of 6 hours 48 minutes which was a massive 91 minutes off the previous record. 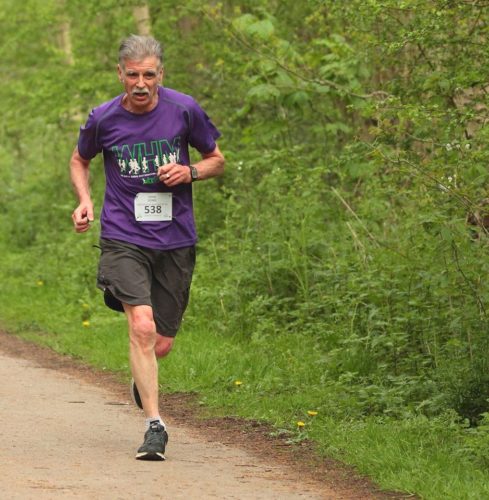