Liverpool Pembroke & Sefton athletes were again split between two venues as they contested the medals at Blackpool & Bebington in the Lancashire & Merseyside Track & Field Championships.

At Bebington, nobody matched the double victories of Blackpool but there were plenty of excellent performances. Danny Higham was a comfortable victor in the SM 400m (48.9) while the rapidly improving Martha Simms clinched victory in the U15G Long Jump (4.66m). Jacob Slater powered to victory in the U13B 1500m with a sprint finish from 50 metres out (4:54.1), while Joe Houghton (U17M) produced his best ever performance (2:05.9) to claim a bronze medal in the 800m. At the same distance, Jonathon Bride (SM) ran his fastest time of the year (1:59.8) to take silver.

Coach Dave Brown will be pleased with the performances of his young throwers. Ben Harding took bronze (43.25m) in U20M Javelin while newcomer, Will Steel, won the U15B Javelin with a throw of 31.88m with team mate, Matthew Fairclough taking the silver (27.39m). Sister, Laura meanwhile was adding to her medal haul with 2nd place in the U20W Hammer (33.0m) and 3rd place in the Shot (7.58m).

The club’s veteran athletes all came away with medals. Kirsty Longley won gold in the 3K, beating all the younger age groups along the way. Mark Crompton was second in the Pole Vault (2.60m) & third in the discus (26.44m). Clare Constable, who is busily preparing for the world masters championships later in the summer, rounded off the day by taking silver in the 400 metres (61.4).

The club had one competitor competing in the Cheshire Championships held at Stretford. Jenny Pyatt set a new championship best performance in winning the U20W Discus with a throw of 41.75m 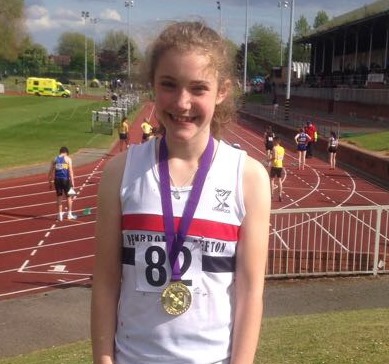 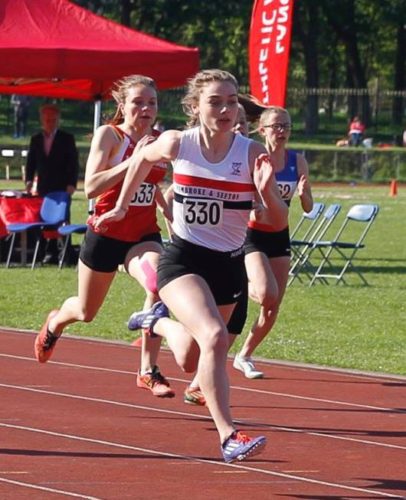