You are here: Home > Jenny claims bronze at English schools

LPS athlete, Jenny Pyatt, representing Cheshire schools, won bronze at this year’s English Schools Track & Field Championships, held at Alexandra stadium in Birmingham. Her throw of 41.86 metres, although below her personal best for the season, secured her third place in the senior girl’s event.

Kai Finch(1.89m) will be disappointed with his 6th place finish in the Inter Boy’s high jump. A silver medallist last year, Kai saw the title won with a jump of 1.95m, a height he has achieved already this year. In the Inter Girl’s age group, Erin Birchall’s long jump of 1.92m was not sufficient to take her through to the final, but after a lengthy period out through injury, to actually compete at these championships was a bonus.

Liverpool Pembroke & Sefton’s senior team produced a dominant performance in their northern league fixture at Ormskirk and with it, promotion to division 2. With 22 victories in the ‘A’ events and 21 in the ‘B’, they amassed a colossal points score of 505, compared to East Cheshire (406) and Salford Metropolitan (247).

The male sprinters won 5 of the 6 races they contested with Danny Higham’s time of 48.6 in the 400 metres the most eye catching. The male throwers went two better winning 7 out of their 8 events. Although veteran, Gary Ireland was prominent in winning the hammer (35.01m) and shot (11.45m), it was good to see the emerging talent of Ben Harding who improved his personal best by over 2 metres to win the javelin (45.40m) and Callum Hynd who secured victory in the ‘B’ discus (30.42m).

Lucy Townson continued her fine run of form, breaking 60 sec for the first time in winning the 400m, after an earlier victory in the 400m hurdles (72.1). Helen Sahgal, making her track debut, had a fine run to win the 800 metres in 2:19.8. Rrachel Hutchinson was pleased with her throw of 38.33m to win the javelin, but Jenny Pyatt, fresh from her performance at the English schools, won all three of her events, with throws of 41.85m in the discus, 38.07m in the javelin & 10.18m in the shot.

The day finished as it had begun, with two dominant victories in the 4x400m relays.The women were first up with Clare Constable, Hilary Honeyball, Alex Bunclark & Helen Sahgal edging out East Cheshire, followed by the invincible quartet of Danny Higham, Harry Doran, Joe Milton & Luke Edwards beating the same opponents by over 20 sec. 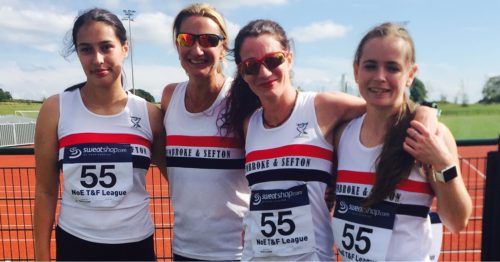 ← Success at the seaside
Clare gets GB Masters Call →