News reaches us that Jim Railton has died aged 81. His career can be found in our Liverpool Pembroke History section under the title of `The remarkable Jim Railton’.
Jim was a sprinter ahead of his time. As a pupil at the Liverpool Collegiate School he set numerous school records at 100yds, 220yds, 440yds and Long Jump. He repeated this sort of success through to county, Northern and National titles. In 1952 aged 16 he burst on to the international scene during a fairly ordinary meeting at Blackpool. On a grass track he ran an amazing 440 yards in 49.2.
By 1953 he was taking Northern Junior titles, 100yds(10.2) and 220yds(22.8) and at the Senior Champs reduced those times to 9.9 and 22.4. In July at the White City a sprint relay quad of, Peter Matthews, Geoff Brandwood, Jim Railton and Fred Hughes took national honours. The national junior 100 yards was later his that year with another wonderful 9.9 seconds.
He went on to further success at Loughborough University but his interests were gradually shifting elsewhere. Hidden away, perhaps, was his best performance in 1955 at an Indoor Meet in Dortmund when he ran 6.7 for 60m.
After Loughborough he became involved in coaching rowing at the highest level and later became rowing correspondent at the the Guardian and Times newspapers. He was also in charge of the sporting facilities at Oxford University`s famous Iffley Road track.
(photo shows the winning sprint relay quartet who in 1953 took both the Northern and National Junior 4 x 100 yard titles, Jim Railton, Fred Hughes, Geoff Brandwood and Peter Matthews) 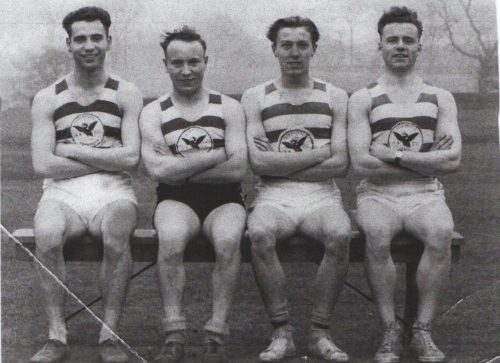