You are here: Home > Frank Wilson

It with sadness we report the death of one of Pembroke’s outstanding track runners of the 1950s Frank Wilson.

Frank started out as sprinter and was part of the 4×440 yards relay team that won the AAA title in 1956 along with JimRailton, Harry Connor, Frank Wilson, Ian Keith. The recorded a time of 3.19.6 which compares favourably to the later club record of 3.15.8(2006). Frank progressed on to 880 yards and if I am correct he made the AAA final in that event. In his later years he ran with Plessey AC and was a regular face on the local road running circuit in the 1990, and early into the new century.

Funeral
Frank’s funeral will be held at Springwood crematorium on Tuesday 27th March at 11.30 am 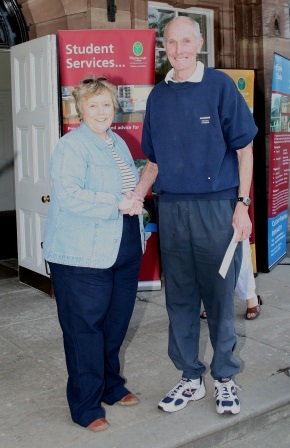 Frank collecting a Vets prize at Croxteth Park 10k in 2004