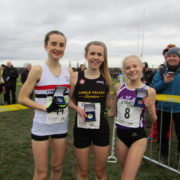 Another great performance from Tiffany

The Northern Cross Country Championships were again held at Pontefract over a dry, rolling course. In spite of not racing since early December the Liverpool Pembroke Sefton international Tiffany Penfold unhesitatingly took the lead in the Junior Women`s race, pressurising her rivals. Her initial 10 second lead began to evaporate though in the final kilometre […]