You are here: Home > Brian Hughes

Brian Hughes was the first local, long-distance runner I heard of as a child in the early 80s – my mum told us that her work mate’s husband ran marathons! He would train every evening, setting off along Hatton Hill Road for a “long” run, sometimes joined by one of his daughters on her bike. It sounded gruelling but inspiring too. As a teenager I remember meeting him at a cross-country run in Croxteth Park, he must have already been in the V50 category. We wore the red-hooped running vest back then.

Some 23 years ago, before turning sixty, he suffered a major heart attack while taking part in a fell race. It caused him to have to take early retirement from his job as a customs and excise inspector. But stoic and determined to keep busy, he took up a new job as a lollipop man (from which he retired just a couple of years ago, at the age of eighty!). He also became skilled in the craft of wood turning and began learning French. And, to the amazement of the cardiologists who would attend him over the years at his regular hospital check-ups, he would not be forced to hang up his running shoes. Albeit at a reduced mileage, he returned to his daily routine of donning his running gear and heading off along Hatton Hill Road. He loved the countryside and participated again in the odd fell run (the photograph shows him in the 2008 Flower Scar Fell Race). A quiet, modest and caring man, I am grateful to him for his messages of support after I suffered a leg injury in a car accident – they were a motivation to me to get out and do some kind of running again, for the simple pursuit of keeping fit and enjoying the outdoors.
Last week Brian set off along Hatton Hill Road for what would be his last run. His discipline, stoicism and passion for running, in the face of life’s adversities, will continue to provide inspiration to me for years to come.
Peter Normile 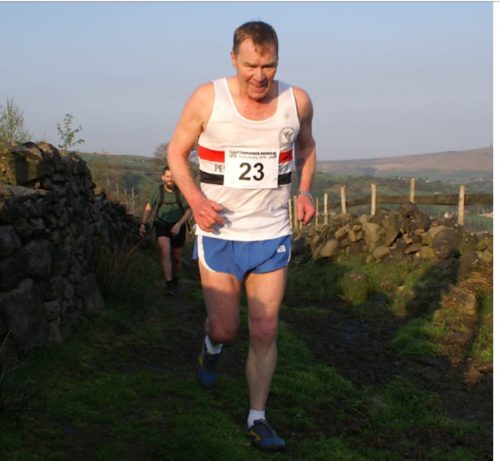 One Response to Brian Hughes