After an enforced one year absence caused by Covid the UKA cross challenge returned to Sefton Park on 27th November. There was however  concern in the hours leading up to this event as storm Arwen ran a mock across the UK uprooting trees and bringing down power lines. It was once again the selection event for the European cross country championships and it attracted a top class field with runners coming from all parts of the UK.

As in previous years it again hosted the Mid Lancs and Liverpool & District leagues, these two always swell the fields making this the most popular in numbers terms of all the cross challenges. LPS has a foot in both Mid Lancs and L&D camps so it was with with much interest we fielded strong teams in both senior men and women’s events.

In the early programme Will Roberts was 14th in the under 11 boys race, Mina Griffin was 35th in under 13 girls. Tom Henderson 26th, Dan Berry 34th and Dan Leggit 42nd all ran well in the under 13 boys race. Erin Frost was in the thick of it in the under 15 girls finishing 5th and being supported by Sarah Yates 12th and Anne Yates 18th we finished 3rd team in the Mid Lancs. Megan Lloyd narrowly missed making the counters. Issac Dickinson, Dan Palin and Ruben Andersen packed well to bring the under 17 team home in 9th place. Kate Sutcliffe in 16th place was our sole representative in the under 17 women.

Excellent packing by our senior women (Kirsty Longley, Debbie Crook and Chloe Leather) saw us take second spot in the Mid Lancs team race and regain the Liverpool & District title in a very close battle from Wirral AC. This always looked a close contest as Wirral had two athletes in the first three but strong packing by LPS ladies was enough to secure the title. Izzy Rainer, Rachel Yates and Sharon Roberts closed in the LPS ‘B’ team in the Mid Lancs.

The battle for the prestigious team race in the 117th Liverpool & District was always going to be tight. After our success in the 2019 championships we had high hopes that we might retain our title however in an exciting race Liverpool Harriers regained the title by the narrow margin of 7 points. Both clubs turned out strong teams in depth with Jonny Mellor 1st leading home Liverpool and Ross Harrison 2nd leading the LPS chase. Ross was supported by Tony O’Brien 8th, Chris Maher 9th, Oliver Sutcliffe 15th, Jake Dickinson 16th with club captain Mark Wynne closing us in 21st place. We look forward to February when we have another opportunity to wrestle back men’s title and hopefully see our ladies collect their third team title in a row at Clarke’s Garden.

In the Mid Lacs results we finished 3rd team with Lancaster University managing to slip in between ourselves and Liverpool Harriers. After two races in the Mid Lancs we are well placed with all to go for in the remaining fixtures. 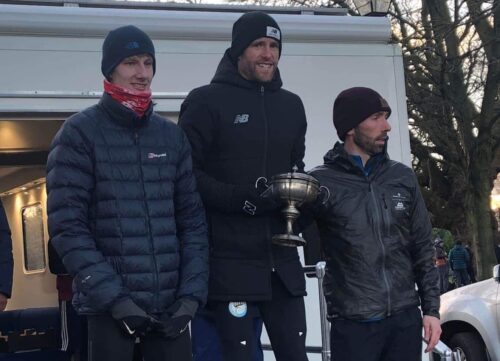