You are here: Home > Charlie Kelly

Sadly news reaches us of the death of Charlie Kelly at the age of 97. A talented Pembroke runner of the post war years he was the first Pembroke athlete to gain international status.

Charlie Kelly: The club`s first track international
The Pembrokians that gathered together after the Second World War were largely older members veterans of the glorious thirties. A 1947-48 group photograph still shows Norman Jones, Harold Marsh, Jimmy Auburn, Kenny Cookson and also Bobby Cooke and Charlie Bourne who were to figure strongly later as coaches and officials. Younger members were appearing though and were to have a major impact. One of these was Charlie Kelly.
Charlie first made contact with the sport after winning the Waterloo Schoolboys 220 yards championship nin 1937 but his real interest lay elsewhere. He had developed into an accomplished ballroom dancer but was gradually prised away by his brother who was a physical training instructor. A chance meeting with Pembrokian Bill Finigan and he was quickly drawn into athletics. The year was 1944. Jim Rimmer and Albert Hogg were the club star sprinters and quickly left Charlie adrift but he began to show up well in club handicaps. At his first open meeting at Leverhulme Park he ran the half mile in the medley relay where he impressed. Later in the season he returned to Bolton and won his first open event, the one mile handicap in 4.12 off 165 yards.
Charlie was duly lured into the cross country scene and astonished everybody at the opening Monstre Meet Mile break at Prenton with a decisive win. He quickly established himself as a harrier winning a succession of inter-club events, even gaining representative vests for West Lancashire and the Northern Counties. Clearly he was going to have a fabulous track season and he obliged by victories in various mile handicaps and as a member of the successful two mile team which continued its pre-war reputation. His first track representative honour came when he donned Northern colours in a match against the AAA and Midland Counties. He was second with a time of 4.28, the first club member ever to go under 4.30.
His cross country reputation continued into 1945-46 with another Monstre Meet mile win and a succession of victories in inter-club events. He declined further involvement in cross country to prepare for the following track season and must have felt justified as he became the club`s first track international. This came in the
form of an invitation to represent Ireland in the Triangular International against England and Scotland having sealed selection with victory in the Northern Ireland mile championship in 4.34. He finished third in 4.28 just half a yard off a sensational victory. There were also numerous other mile handicap successes to follow and also victory in the Lancashire half mile championship.
The following season he retained his Northern Ireland title with ease and was only pipped for the all-Ireland title by the legendary Joe Barry. Although winning so-called Olympic Trials he was ignored by the selectors but a second international honour came his way in the usual triangular match with England and Scotland but was unplaced. However, at the AAA championships he ran another club record of 4.24 in his heat.
During the winter he was working in Manchester and came into contact with coach Walter Perrott of Manchester AC. This was to prove an inspirational partnership. In the Lancashire half-mile championship he was third to Frank Evans (MAC) and Ernie Gallagher (Liverpool Harriers) but he had captured another club record with 1.57.5 which he later cut to 1.57 at an invitation race at Chesterfield. A trip to Dublin for an all-star meeting and he was a fine second in 1.58. A following race saw him team up with Harry Ashcroft, Ken Bruns and Ken Thompson to bring the Northern Counties Medley Relay Championship to Pembroke for the first time in a record time of 3.39.
But the star performance of that season was a magnificent 1.56.4 half mile in Dublin as he took the All Ireland title. It was Pembroke`s first ever national track title. Amazingly there was more to come as a Jimmy Milburn, Charlie Kelly, Ken Bruns and Harry Ashcroft 4 x 440yards line-up gained second place to the great Polytechnic team at the AAA Championships in Port Sunlight. A further Irish International vest came in another triangular, fifth this time but with another club record of 1.56. Subsequent seasons saw him lower the club record to 1.55.4 and controversially he even took this to 1.54.9 again in Belfast but a lack of qualified timekeepers officially ruled this out.
Charlie later turned too coaching and when his career took him to Coventry he joined the Godiva club and became a highly respected coach there. Following earlier cross country internationals Norman Jones and Harold Marsh the club was beginning to acquire a reputation on the track as well. 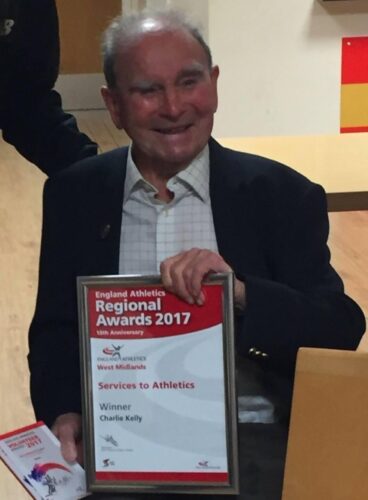