Charles who died on the 2nd May was born in Liverpool in 1933 growing up in those pre war years his family lived in Dovecote before moving to Hunts Cross. Like so many of his generation the war interrupted so many things including his early schooling however undeterred Charles went on to pass his 11 plus and won a scholarship to the Liverpool Institute.

On leaving the Liverpool Institute he went to work as a lab assistant at Liverpool University. It was there that he met George Kirkham who introduced him to Pembroke Harriers in November 1949. In the post war years athletics was just restarting and competition was limited so most Saturdays were spent doing club runs during the winter with championships after Christmas. In those days Pembroke trained from Court Hey Park in Huyton which was a rural area of mixed farming and ideal for cross country running. It wasn’t long before Charlie fell in love with the sport and Pembroke Harriers in particular.

Not long after joining Pembroke Charlie was enlisted into the army for his national service spending most of his eighteen months in Germany. It was during this time he realised that he wanted return to education so once he completed his national service he enrolled in a teacher training program at Dudley teachers training college in the Midlands. Charlie’s love of athletics was matched by his enthusiasm for education and the possibilities that offered. He worked initial as a primary school teacher before teaching geography in secondary schools then moving on to develop an interest in remedial education becoming specialist in the subject.  He was the editor of a higher education journal for many years. During his teaching career in the Midlands he ran for Halesowen and was elected a life member of that club. He moved back to Liverpool in the mid 1980s and recommenced his links with Pembroke.

His in depth knowledge of athletics was incredible, Charlie had a vision for athletics which was based around club athletics. His belief that the clubs were the most important part of the sport, they produced the athletes, coaches, officials and they provided the grassroots competition. Encourage and nurture the clubs and you will get a sustainable and successful sport at all levels was his mantra. The governance of the sport was another issue he cared deeply about he was a committee man by nature and he was keen that decisions should whenever practical be made locally not to be passed down from unelected administrators more concerned about their own career prospects than the lasting impact their decision might have on the sport.

He was a forward thinker always playing the long game, he was one of the first to recognise in the 1990s that clubs should pool resources to bring about more effective use of facilities and volunteers. He was instrumental in the merger of his beloved Pembroke Harriers with their 100 year rivals Sefton Harriers. It was his vision and dedicated work which saw his dream of these two great old rivals coming together to create a club for the 21st century. Liverpool Pembroke & Sefton was something very special to Charlie he forged the links with Edge Hill University which saw the club move from their traditional Merseyside base to West Lancashire a radical move in itself. The club thrived and were promoted to the National Athletics league for the first time ever as well as picking up team and individual titles at the national cross country shortly after the merger. The youth section of the club grew as the club forged new links in the area. He was the backbone of the club, taking on numerous roles over the years. He forged a partnership with Edge Hill University and created feasibility studies which in turn contributed to the development of the athletic facilities fat the university.

Charlie loved to read and research writing many articles, he complied biographies on a number of athletes from the early part of the 20th century. He also complied an in depth history of his beloved Pembroke. He was also a lifelong member of the Labour Party and represented the party as a local councillor for many years before retiring in his 70s. Always the pragmatist he believed ‘politics was the art of the possible’ stay focused and don’t let others distract you from goal was his philosophy. Charlie saw opportunities when others only saw obstacles, and he used his formidable negotiation skills to great effect.

His contribution to the sport and our club in particular is immeasurable. His legacy will be his beloved Liverpool Pembroke & Sefton. 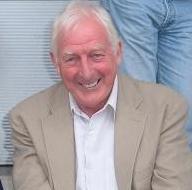