Courtney Storms to County Title
Three times winner of national cross country titles at 13 and 15 years of age Ormskirk’s Courtney Birch demonstrated her talent over difficult courses had not deserted her as she stormed to the Lancashire County Senior Women’s championship title at Blackburn. Currently a post-graduate research student in physical chemistry at Oxford University she has set her sights this season on the Northern and National events and her performance will have been noted by her rivals elsewhere.

Kirsty Longley in action at Sherdley ParkOther local Liverpool Pembroke Sefton athletes to tackle the Witton Park mud were Under 13s, Eleanor Mitchell(8) and Scarlet Collins(15) and Under 15 Nicole Garner(24). The Under 15 Boys have a great record in their event but this year Chris Hatton(6), Sean Kirkbride(17), Adam Goldfarb(27), Stephen Biggs(28) and Jack Hobson(33), had to settle for fourth team. Hatton’s run was exceptional as were other equally good performances from Under 11 Nathan Browne(8), Under 17 Paul Roberts(7) and Under 13 Kyle Nicholls(5). In the latter event Kyle had support from David Reece(20) and Adam Dible(22).

It was hard to choose the best LPS performance in the Merseyside Championships at a well organised and demanding course at St Helen’s Sherdley Park. It could have been Kirsty Longley`s strong run in the Senior Women’s race to collect the bronze medal which she delightedly spent the rest of the afternoon proudly wearing round her neck, Bernie Murphy’s experienced 7th spot in the Senior Men’s event also collecting the first Over 40 award or perhaps to Toby Loveridge who ran off course while leading in the Under 15 race but courageously got back in to finish third. Bernie was supported by senior colleagues Adam Clansey(13), Graham Cairns(21st and second Over 50), Greg Callaghan(31) and John Dobie(75th and third Over 60). Toby’s team mates were Ed Rimmer(10) and Joe Meakin(19) and but for the absence of injured but spectating Mike Bride would surely have been among the team medals. Also incomplete were the Under 17 team of David Forrester(5), Chris Hesketh(8) and Sean Dignam(19). Additionally Danny Gordon ran a sound 8th in the Junior race and Charlotte Haines(27) and Elizabeth Cooper(30) flew the flag for the club at Under 13. 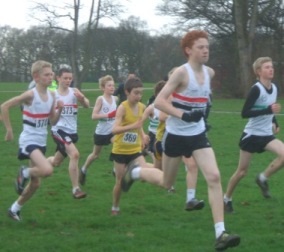 place after running off course while in the lead, he was determined to make no such mistake in a Mid-Lancashire Cross Country League match at Lancaster University. He positively revelled in the muddy conditions, immediately stamping his authority on his rivals and soaring away from the field. The only late challenge came from Liverpool Pembroke Sefton team mate, Mike Bride, recovering from injury and working his way determinedly through the field. Both look excellent prospects for the forthcoming Northern Championships. LPS cemented its reputation in this age group as Ed Rimmer(8), Chris Hatton(10), Sean Kirkbride(23) and Adam Goldfarb(26) closed in for a comfortable team win.

The club is again `building from the back’ with Under 11s Nathan Browne(4) and Aaron Quinn(16) plus Under 13s Kyle Nicholls(6), Andrew Hutchinson(11), Warren Turner(13), George Curran(19), Ben Haines(31) and Jonathan Bride(39). The under 13s also took their respective race. The Under 17s were not at full strength although Chris Hesketh(5), Sean Dignam(15) and Tom Hanlon secured 5th team spot. In the senior race the club`s two Edge Hill University runners Jon Dudley(45) and Clark Roberts(80) both ran soundly.

Kirsty Longley’s bubbling confidence received yet another boost as having collected a bronze medal in her county championships the week previous she finished a remarkable 4th in the Senior Race. Barely 12 months ago she could hardly make the first 20 in this event, now she looks increasingly like a class act. Rebecca Harrington(53) was her sole team mate on this occasion. Elsewhere the LPS girls were also in action with Under 11s Charlotte Haines(19) and Lauren Donaldson(35), Under 13s Scarlett Collins(28 and Erin Devlin(50) and a trio of Under 15s, Jade Hislop(190, Eve Fellows(26) and Nicole Garner(27).
12 January

Ashall confident and assured at Sheffield
The 400m is a tough sustained sprint outdoors but indoors, on a banked track with runners breaking on the second lap, is even more demanding. The Liverpool Pembroke Sefton squad 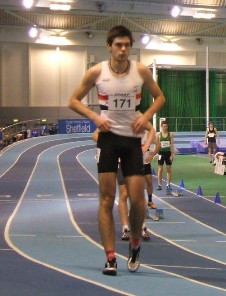 has demonstrably mastered this technique over the years and none better currently than 17 year old Wayne Ashall. Having collected last year a Under 18 European Gold relay medal he was full of confidence for the opening rounds of the indoor season including the Northern Under 20 Championships at Sheffield. Running with maturity he broke first after the initial lap and held off his opponents with assurance recording an impressive 49.13 to collect the gold medal. Already voted the West Lancashire Sports Personality of the Year he continues to improve. The strength of LPS was demonstrated by two other athletes making the final, Danny Higham 5th in 50.94 and Jack McGinn 6th in 52.31.

Phil Tayl;or with his silver at the Northern IndoorsWayne was not alone on the rostrum. Senior colleague Phil Taylor, another European Indoor Relay gold medalist from last year was up against one of Britain`s best 400m prospects Richard Buck(York) but closed in to take the silver medal in 48.49. He later added a bronze in the 200m with a time of 22.02. Having already posted a 21.8 his expectation might have been a little higher but he`ll be content with two medals at his first serious outing. Harry Doran was another finalist clocking 23.30 in the U20 200m to finish 5th as was Alex Stokes, another 5th in the Senior 60m with 7.14.
20 January

Under 15s again among the medals
Liverpool Pembroke Sefton were at the notoriously hilly Roundhay Park, Leeds for the  The Under 15 trophy, won convincingly twelve months ago, was returned and a new squad 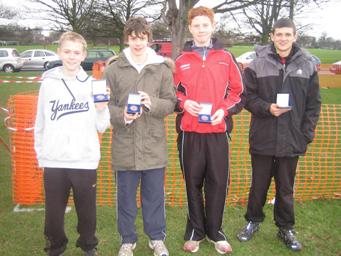 prepared to defend the title. As usual the competition was fierce and although performing strongly Toby Loveridge(20), Mike Bride(49), Chris Hatton(54) and Ed Rimmer(61) saw they were out of contention and gathered for the trek home. An announcement that they had indeed finished third team sent them scurrying back to the presentation stand for the bronze medals, an award which will boost their confidence ahead of the National Championships later in February. As usual there was a good supporting crew of Sean Kirkbride(64), John Meakin(84) and Adam Goldfarb(159).

The Under 13 team has edged forward this season and again they packed solidly led in by Kyle Nicholls(36) followed by George Curran(49), Warren Turner(61) and Andrew Hutchinson(91) with David Reece(127) and Jonathan Bride(183) also in attendance. A seventh team placing was their reward. The Under 17s were frustratingly short of a counter as David Forrester(38), Chris Hesketh(72) and Paul Roberts(95) ran solidly and the club could only field a single competitor, Clark Roberts(83), in the Under 20 race. LPS also fell short in the Senior event but can take heart that Bernie Murphy(79), Adam Clansey(94), Sammy Rashid(109) and Jon 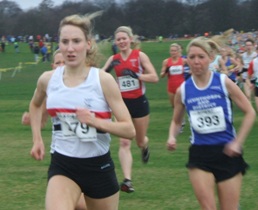 Dudley(217) all finished in the top third of the field.

Courtney Birch tackled the Senior Women`s event, over the same course where she had won a National title Courtney in action at Leeds as a youngster. Still some way off her best she will deem 19th satisfactory. Kirsty Longley`s 58th looks less impressive on paper than the actual achievement. She has her own goals and is steadily ticking off the list of local rivals she has overtaken in the last 12 months. This is now down to single figures. Elsewhere in the U15 girls Jane Hyslop(115) and Nicole Garner(164) ran well and there was a courageous performance from Erin Devlin(215) in the U13s. Results

While the cross country runners were battling it out in Leeds not far away in Sheffield the Northern Indoor Championships were being held where under 17 Callum Burns was tackling the two lap 400m. After winning his heat in 53.87 he took the initiative in the final grabbing the lead and was only fractionally overtaken by two other athletes in a blanket finish to record 53.39. His courage and tactical awareness indicate he is yet another powerful addition to the super-400m club based at Edge Hill University.
Northern Under 17s Indoor Results
26 January