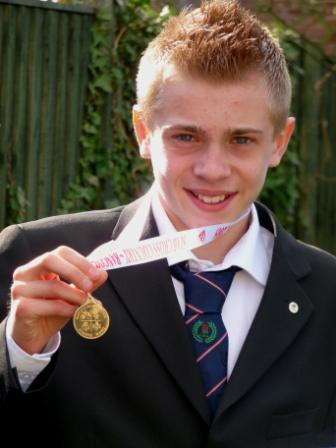 England Gold for Alistair Nelson 28 March
For someone who only took up running only 9 months ago 13 year Alistair Nelson has enjoyed a roller coaster ride to the top of his sport. The Liverpool Pembroke Sefton cross country runner has shown remarkable talent and composure. By finishing fourth in the English Schools Championships he qualified to represent England in the Aviva Siab International Cross Country Race in the beautiful surroundings of the Vaynol Country Estate near Bangor, North Wales. Up against the best from Scotland, Wales and Northern Ireland he made his usual cautious start but worked his way through the field climaxing with a storming sprint finish to close in sixth and third counter for the victorious England team. The Burscough Priory Science College pupil has astonished even his coach, John McCarten, with his progress and maturity. He is yet another outstanding product of the club’s Edge Hill University training squads.
Club sprinter Harry Doran who has also medalled while collecting an English Indoor vest this year has received a call up for the North of England team in their annual international match in Malta later in the month. The 400m runner is a student at Southport`s KGV College who recognise and support this talented athlete. He hopes to continue his studies next year at Edge Hill University.

Another international call up
Alister Nelson Liverpool Pembroke Sefton got 2009 off to a great start with sprinters Phil Taylor collecting a silver relay medal indoors for Great Britain in the European Championships in Turin and Harry Doran also medalling for England Under 20`s in an indoor home countries match in Cardiff. Now they are unexpectedly joined by one of the club’s youngest members. Running in the high profile English Schools Cross Country Championships in Leicestershire Alistair Nelson looked off the pace for the first of two laps of the Junior race but produced a storming run on the second circuit to finish fourth and guarantee himself a place in the English Schools team in the forthcoming home countries match in Bangor, North Wales. Although the 13 year old just missed out on an individual prize the Burscough Priory School pupil led Lancashire to the bronze team medals. He has had an astonishing first season in the sport.
Also at the championships and running for Merseyside Jai Vernon-McGuigan was 104th in the Intermediate race. At Senior level David Forrester(66) and Harry Boyd(71) led their county home to 13th spot. Toby Loveridge and Michael Bride failed to finish. Paul Roberts was 271st for Lancashire. The club had two representatives in the Senior Girl’s race, Rhea Ellis first home for Merseyside in 38th and a courageous Toria Swift(189) who was part of a respectable 8th placed Lancashire squad.

Tough end of season course at Blackburn 14 March
With the English Schools Championships only a week away a number of Liverpool Pembroke Sefton athletes rested. However, a small contingent made their way to Blackburn’s Witton Park for the final Mid-Lancashire Cross Country League match, where the organisers had supplemented the notorious challenging `saucer’ climb with an equally sharp hill designed to stretch the older competitors. The club’s Under 17 men were not present having already secured their respective title so the focus switched to the Under 15`s who were also medal prospects. Sean Kirkbride(9), Adam Goldfarb(13), David Reece(17) and Kyle Nicholls(24) ran very solidly and secured third team behind close rivals Blackburn and Lancaster and Morecambe, although overall silver medals now look possible. George Curran was 28th. The Under 17 Women saw excellent runs from Emma Binns(3), Toria Swift(5) and Nicole Garner(7) to take their race on the day but not enough previous results in the bag to claim any overall prizes. There were additionally incomplete teams at the U13 level, Georgina Hannaway(32), Alicia Burke(35) and Molly Morgan((37) for the girls and James Grundy(9), Albert Curran(24) and Jonathan Bride(33) for the boys. Elliot Harman(42) was a solo runner at Under 11 as was the diminutive Charlotte Mawdsley(30) who impressed on her first outing for the club. In the high profile Trafford 10K Road Race senior Kirsty Longley was not among the prizes on this occasion but ran a personal best time of 38.20.
At the Trafford 10k on 15 March Kirsty was 122nd in the race. Adam Clansey was 80th in 35.51 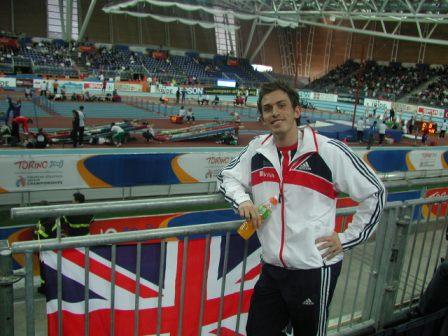 Phil ‘Silvers’! 8th March
The European Indoor Championships at Turin provided somewhat meagre pickings for the Great Britain and Northern Ireland squad but Liverpool Pembroke and Sefton 400m star, Phil Taylor, rose to the occasion again as a member of the 4 x 400m squad. Two years ago he collected a gold medal and the selectors obviously appreciated his experience giving him the crucial final leg against the opposition big guns. Led off by an inspired Richard Buck and courageous runs from Nick Leavey and Nigel Levine the GB squad had a narrow lead over the fancied Russian team at the final takeover. The Russian duly struck overtaking Taylor who kept his cool, recovering on the final bend. As the Russian faded Poland took up the challenge but neither was prepared for the amazing finish of the Italian team that swept to victory. As ever Phil Taylor’s power and professionalism came to the fore, he concentrated on the final dip and although the timekeepers could not separate them GB was declared silver medallists over the Poles who also recorded 3.07.04. The supporters club of Phil’s family, coaches Ray Twentyman and Trisha Farrell plus Dave and Karen Brown were overjoyed. The eagle eyed will have spotted the club’s banner on the back straight!

A disappointing time at Nottingham 7 March
Seven club members were representing their respective counties at the Inter-counties Cross Country Championships at Nottingham. Possibly the two most pleased were Alistair Nelson(51st in the U15s) and second for a Lancashire team that finished 14th and Rhea Ellis at U20 who was 32nd and first of the Merseyside contingent in 17th team spot. Harry Boyd was 93rd and second home for Merseyside at U20 but the team was a lowly 24th. Kirsty Longley was way off her best in the Senior Women(156 and 4th counter for the 24th placed Merseyside). The club’s Merseyside U17 duo of Toby Loveridge(67) and David Forrester(98) led their county to 22nd with Jai Vernon-McGuigan 133. It was one of those days when nobody really hit top form. These things happen!