Charlotte joins international club 26 April
The Liverpool Pembroke Sefton club journeyed to Warrington for the first round of the National Junior League(Mersey Division). The squad was far from full strength finishing sixth of eight teams, a position they can certainly improve on as the season unfolds.
Pride of place must go to Charlotte Christian who has had an amazing week. Here she threw 38.55m to not only win the women’s hammer but collect the Female of the Match Award. This is the second time in 7 days that she has set a personal best and new club record. In between she learnt of selection to represent her native Isle of Man in the prestigious Island Games that will be held in Scandanavia in June. This is the Olympic Games of small islanders. She joins five other athletes who currently represent their country, an unbelievable ratio for a club of this size.
Although slightly overshadowed by this Jessica Broady is quietly making parallel progress and here took the B event in 31.79m. The rest of the women Hannah Roberts, Annie McLoughlin, Nicole Garner, Emma Binns, Toria Swift and Grace Stewart collected useful points across a range of other disciplines.
For the men Danny Higham’s fine 400m win in 50.3 stood out and he also understudied the redoubtable Harry Doran(23.1) in the 200m with 23.6. Another pleasantly surprising double came in the 800m in the shape of Tom Hanlon(2.00.0) and Sean Dignam(2.07.3). Additionally Dean Mathews had a great day out with a long jump of 5.97m(4th) and a triple jump of 12.45m(2nd). Billy Williams remained a bit disconsolate with his third placed 1.75m high jump but should take comfort at being easily the youngest leaper on the day. Simon Birch added useful points elsewhere. Finally, Mathews, Doran, Higham plus Wayne Ashall and Ross Helms combined variously to collect third spot in the 4 x 100m and an easy victory in the 4 x 400m relay.

Personal best for Doran in Malta 19 April
Harry Doran’s outdoor season got off to a sparkling start in Malta. Representing Northern Athletics he recorded a personal best 400m time of 48.4 finishing fourth in a class field. He might well have got a medal in the 4 x 400m relay squad but for a disqualification. He will be brimming with confidence as the track and field competition gets underway.

Promising track and field start for LPS athletes 19 April
The track and field season opened for Liverpool Pembroke Sefton athletes with the traditional Liverpool Harriers Meeting at a sun blessed Wavertree where times were times and distances were important indicators for the forthcoming contests. There were performances that immediately caught the eye. At Under 17 Adam Thomson recorded an excellent 100m in 11.8 and 200m in 22.8. He will step up to his favourite distance 400m later in the season. Jesse Roberts in the same age group ran a solid 400m in 54.20. Likewise at Under 20 George Curran takes the 1500mDanny Higham flagged up his 400m credentials with a sparkling 50.9. The Under 13 Alex Higham was sharp with 100m in 13.9 and 200m in 29.9. Among the U17 Girls Aimee Hall progressed to 100m(13.3) and 200m(27.2).
The middle distance runners were also on show led by the club’s new schools cross country international, Alistair Nelson, who tackled the U15 800m for the first time and recorded an impressive 2.10.5 with David Reece on 2.31.5 and Warren Turner 2.31.7. Georgie Hannaway was additionally pleased with her two lap time of 2.48.8 in the U13 Girls. At U13 1500m Nathan Browne ran 5.19 while team mate George Curran posted 4.34.3 for the U15s.
The biggest smile of the day went to U20 Charlotte Christian whose journey towards a 40m hammer throw got a boost as she threw a personal best and club record of 37.76m, also claiming a shot putt of 8.34m. In the senior javelin Chris Fairclough excited with 52.19m with veteran and coach, Dave Brown, demonstrating his old fluency at 39.95m. The club has clearly wintered well. 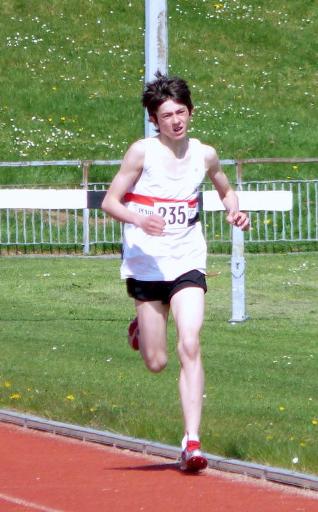