Phil Taylor went to the Aviva Grand Prix Indoor Meeting at Birmingham knowing he had to turn in a convincing 400m invitation race to impress the selectors choosing the GB team for the European Championships in Turin. In spite of being badly bumped at the 200m break line he demonstrated once again a magnificent finish, fighting all the way to the line, to record a personal best time of 47.16 in third place. This is a re-run of two years ago when he forced his way into the 4 x 400m relay squad and came away eventually with a European gold medal. Hopefully his tenacity and determination will have impressed the selectors once again but he will have an anxious moment or two before their meeting.
Another of Liverpool Pembroke and Sefton’s 400m stars is Harry Doran who was pulling on his first England vest at Cardiff in the Celtic Indoor Cup and U20 International meeting in Cardiff. According to coach Ray Twentyman, he ran the almost perfect race only succumbing only in the last 10 metres to an Irish competitor and recording 49.45. To cap an excellent debut he ran the second leg of the 4 x 200m relay to give England victory. His confidence will be sky high after such an auspicious start to an international career.

Rhea Ellis showed her emerging class by finishing a useful 30th in the Junior Women`s race while Kirsty Longley achieved her ambition of finishing in the country`s top 100 Senior Women, closing in 93rd. Harry Boyd was another lone competitor, 143rd in the Junior Race. In the massive Senior Men`s race Adam Clansey was a very respectable 273rd with Sammy Rashid(474) and Keith Lester(1229).

Superb weekend for LPS sprinters 15 February
It was an outstanding weekend for Liverpool Pembroke Sefton sprinters. At the Aviva Suropean Trials and UK Indoor Championships in Sheffield Phil Taylor demonstrated his experience by easing Harry Doran through his 400m heat and semi-final with times of 47.94 and 48.01. Unfortunately he again drew the difficult inside lane for the final but produced yet another famous finish to come through into fourth spot in 47.68 his second best time ever. He now waits to hear whether he will get a place in the GB relay squad for the European Championships in Turin in a few weeks time. Two years ago in a similar position he did and was part of the gold medal team.  Results

Meanwhile at Birmingham in the Under 20 and Under 17 UK Championships club colleagues were collecting two bronze medals again at 400m. At U20 Harry Doran was full of confidence winning his heat in 49.78 and semi-final in 48.5 before running a 48.90 final to collect third place. Danny Higham in the same event went through his heat in 50.06 and stepped up that time to 50.01 in the semi but not quite enough for the final. At U17 a determined Adam Thomsom also had his eye on medals with a heat time of 49.61 and final bronze winning effort of 50.42 in the final. The LPS 400m juggernaut, coached by Ray Twentyman and Trisha Farrell, continues to astound.

Surprise run from Mark Salter 14 February
In  the classic Parbold Hill Race the surprise act was Mark Salter. Running for the first time for LPS Mark was an excellent 28th(out of 439) over this gruelling course and fifth in the O40 category.The training schedule at the Edge Hill track has obviously paid off and there is even more to come. Second claim member Peter Hoyle was also in good form finishing 7th and getting on the prize list. Keith Lester was delighted with his 118 position as was Mark Bleasdale(227).
Elsewhere there was a reduced presence at the Mid-Lancs League at Hyndburn. U11`s Jack Egglesden(14) and Elliot Haram(30) appeared as did three girls at U13…Georgina Hannaway(43) and newcomers Alicia Burke(45) and Molly Morgan(47). There was a very good run from James Grundy(5) in the U13 Boys and  Emma Binns(5), Grace Stewart(8) and Nicole Garner(9) combined usefully to be the first U17 team home.

Phil Taylor shines in Belfast 8th February
Phil Taylor, made a big impression in the Irish Indoor Championships in the new Odyssey Arena in Belfast. After his usual warm up in the 60m, a heat time of 7.16 and semi-final of 7.23 he proceeded to his main event the 200m. After an untroubled heat of 21.99 he turned on the power to take the final in a sharp 21.84. This was exactly the confidence building exercise needed to set him up for the European trials this coming weekend in Sheffield.

Alistair Nelson winner at Witton ParkGood Results in County Schools Cross Country 7th February
Liverpool Pembroke Sefton had a good day out at the various schools county cross country championships. In the Merseyside Champs at Stadt Moers Park all LPS athletes represented Sefton schools. David Forrester was winner of the Senior Boys event with Harry Boyd sixth and Sefton second in the team event. Rhea Ellis was a confident winner of the Senior Girls race but Toby Loveridge nearly let it slip in the Intermediate Boys race going off course but recovering in time to get back in front and claim victory. With Jai Vernon-McGuigan third, Mike Bride(6) and Ed Rimmer(14) the club here had the entire winning Sefton squad. Two Junior Boys Warren Turner(21) and James Grundy(22) collected silver team medals while Georgina Hannaway(11) and Beth Deary(17) of Sacred Heart were part of their Year 7 winning school team.
Over at Witton Park, Blackburn for the parallel Lancashire Champs the Junior Boys race was a runaway success for Alistair Nelson, with other West Lancashire colleagues present, Kyle Nicholls(14), David Reece(17), Jake Sache(23) and Darren McDonald(54). The club`s only Intermediate was Adam Goldfarb(23) and similarly Paul Roberts at Senior level whose determination carried him through to sixth spot. Scarlett Collins was 17th in the Junior Girls and Toria Swift 8th in the Senior Girls.

Liverpool & District Champs 8th February
Meanwhile the club`s seniors were at Clarke Gardens for the traditional Liverpool and District Champs.With a great run from Adam Clansey in third, Bernie Murphy(8), Sammy Rashid(17) and Graham Cairns(19) the club were on their way to edging a team medal place for the first time in several years. Kirsty Longley(47th and first female) and a strong Keith Lester(67) closed in with Mark Bleasdale(85).  After an anxious wait the club was placed fifth but only a mere 9 points off the bronze medals. This was, nevertheless, encouraging and sends the strong message that at full strength LPS can claw its way back into the local reckoning. 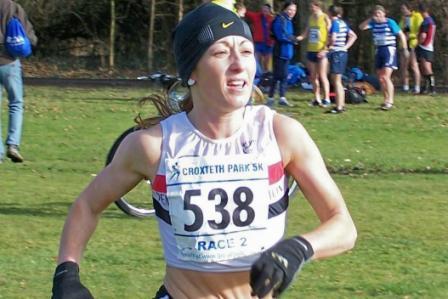