You are here: Home > Rimmer resurgent

After a disappointing Olympics Michael Rimmer is back with a bang. At the British Indoor Grand Prix in Birmingham he lined up with some formidable 800m opponents including Abubaker Kaki(Sudan) twice winner of the World Indoor title and Andrew Osagie, Olympic finalist and the man who in 2012 took away from him his outdoor national title after an unbroken run of five years. Rimmer(1.46.55) has rarely run indoors but that didn`t show as tactically he outmanoevred the field to roar home first with a 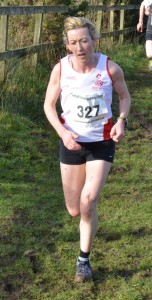 collapsing Kaki on 1.46.57 and Osagie fading to fourth. A brilliant start to a year that includes the World Championships. Two other Liverpool Pembroke Sefton athletes were at Birmingham, 400m specialists Adam Thompson(49.01) and Danny Higham (49.10) both recording personal bests.

A clutch of LPS athletes headed to Parbold for the 43rd running of the popular hill race over nearly 7 miles. While conditions overhead were sunny those underfoot were, in places, a foot deep in mud. A tense battle took place between James Tartt (Southport Waterloo) and Richard Burney (Liverpool Harriers) with the seasider just holding on at the run in. But club eyes were on Kirsty Longley bobbing around amongst some good leading men. She was experiencing the terrors of Parbold for the first time but was clearly not fazed by the tough terrain finishing overall 29th and claiming the leading lady title by some 3 minutes. Others revelling in the race were Matt Thompson(15), John Wealthy(34), Chris Pedder (45), Greg Callaghan(51) Robbie Wood(71), Bua Kalasiram (146) and John Dobie (232). A huge field of nearly 500 eventually poured down the hill to complete, demonstrating conclusively that running customers love this sort of challenge brilliantly orchestrated, as usual, by the home club Skelmersdale Boundary Harriers. Everybody left with a smile on their face.

← Rosie triumphs again!
Michael to represent GB and NI in the European Championships →