You are here: Home > Rose of England

By Robbie Wood on March 17, 2013 in News
Rosie Johnson, Liverpool Pembroke Sefton`s star cross country runner, has had a somewhat up and down season but came out of the starting pen for 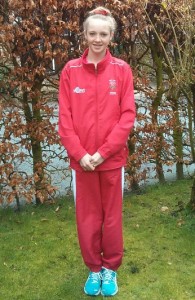 Merseyside in the English School`s Championships in Derbyshire ferociously determined to seal the season with a good result. The mud sections were not to her style but she quickly covered the leading group of Under 15 girls which contained the best talent in the country. She locked on to seventh spotand was not budged from that position. The real joy came later as she realised that a first eight placing would guarantee an England schools` vest in the forthcoming home international. Coach John McCarten has experienced similar joy before but this result was particularly satisfying. Race Video

Also at the Schools were Senior Boys Alistair Nelson(Lancs) who was 87th, Warren Turner (Merseyside) 139th and James Loftus(Gtr Manchester) 197th. The Intermediate Boys saw Jonathan Bride finish 144th and in the the Inters Daniel Slater was 85th and Matt Richardson 226th, all Merseyside. At Junior level there were three LPS girls, Morag Molyneux(Mersey) 121, Anna Hulme(Lancs) 159 and Charlotte Mawdsley(Mersey) 247. A satisfying turn-out for the club.
At the other end of the age scale 66 year old John Dobie ran the Merseyside Half Marathon finishing 417th out of 2000 runners in an astonishing 94.02 to take his age group prize. Kirsty Mackenzie was 933 in 101.38. Over at Sport City in the Sale Open meeting U15 Evelyn Smalley sprinted to a 8.85 60m and produced a 4.16m Long Jump. Amelia McLaughlin(U17) won her High Jump event with 1.65m.
Charles Gains

← Vote for Graeme and Anna!
Stunning international debut for Rosie →