You are here: Home > Stunning international debut for Rosie

By Robbie Wood on March 24, 2013 in News
Rosie Johnson, Liverpool Pembroke Sefton`s cross country star, has really come of age this winter season. Her impressive efforts carried her to an English Schools selection for the Home Countries International at Carmarthen. While most of the country was under snow the conditions here were 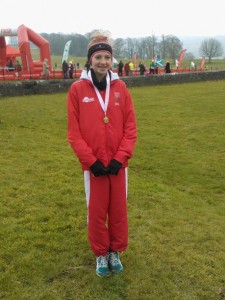 clear with the course firm, well grassed and slightly undulating. This was perfect for Rosie who was always comfortable in the leading Under 17 group. Spirited running almost took her to third spot in the run-in but she was just shaded for an individual bronze amongst some really top-class opposition. Fourth in the country and a mere 15 seconds behind the winner demonstrates the journey she has taken under the careful guidance of 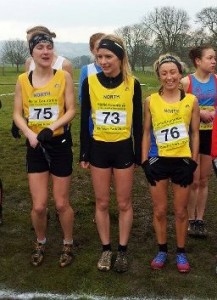 Kirsty Longley(76) at Carmarthen with her Northern team mates

coach, John McCarten. A gold England team medal was the icing on the cake. She now looks completely at home among the country`s very best and will be anticipating a fruitful summer track season.

Kirsty Longley is more than twice Rosie`s age but she also has the same ambition and aggression. Picked for the North in a separate Home Countries International over the same course she justified her selection in the Women`s event with 15th spot and collected a third team award for her region, only narrowly losing out on second by a point to Scotland. As Kirsty had already achieved an O35 England vest in the autumn the season represents double international honors for the LPS club.
Previously veteran Sammy Rashid had competed in the East Hull 20 mile race as part of his preparation for the London Marathon a month away. He was third in the O45 age group with an excellent 2.04.58. A sub-three hours clocking in London is definitely on the cards for this most loyal of members.
Charles Gains