Michael Rimmer was in Doha for the first of the Diamond League matches. Olympic Champion and World Record holder, David Rudisha, was hot favourite for the 800m and duly delivered emphatically in 1.43.87. Michael was in the following clutch of runners that battled it out eventually giving way marginally to two other Kenyans,Mohammed Aman (1.44.21) and Job Kinyor (1.44.24), a Frenchman, Pierre-Ambroise Bosse (1.44.77) and a Quatari, Musaeb Balla (1.44.83). His time of 1.44.97 though takes him straight to the top of the outdoor UK rankings which is very satisfactory particularly as he beat arch rival Andrew Osagie(1.45.41) who was 8th. 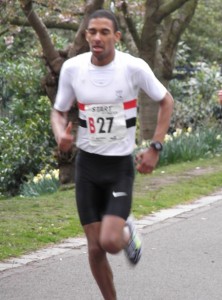