You are here: Home > Stunning weekend for LPS athletes

History was set for Liverpool Pembroke Sefton at the English School`s Track and Field Championships in Birmingham. Two LPS athletes collected the topmost honours. Intermediate Rosie Johnson has come off a highly successful winter programme which included gaining an international vest. She was 8th ranked in the country at 1500m at the start of the competition with an outside chance of a medal but the game changed as the event progressed. After finishing second in her heat in 4.35.01 she suddenly looked better than a remote chance. The final saw her always comfortable in the leading pack until with 150 yards to go she cruised round the field in imperious fashion smoothly accelerating down the finishing straight to take the title by 5 metres from her great friend and rival Harriet Knowles-Jones of the Warrington club who she had never beaten before. Her time of 4.25.86 took a massive seven second chunk off her personal best. Before leaving the stadium the Rainford girl was assured of England selection for the coming international in Dublin. Watch Video of Rosie winning 1500m 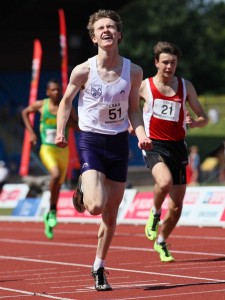 Junior Joe Milton has set the athletic fraternity talking with his great sprint performances this season and something special was expected off him at the new championship event of 300m. He too delivered in uncompromising fashion. After a heat time of 35.79 his rivals were well aware of his intentions. Marginally down on two of his rivals initially he turned up the heat and powered home to glory with a time of 35.70. The Birkdale boy will be chasing even better times before the season is out. Elsewhere Amelia McLaughlin was only just short of podium honours finishing joint fourth in the High Jump with 1.71m. Other LPS finalists were Morgan Greaves-Thomas who was fifth in the 100m and Lucy Staunton-Turner who was 8th in the Javelin. Ed Latimer did not progress beyond his 300m heat but came away with a personal best. Watch Video Joe Milton winning 300m

The senior men and women were at Litherland fighting off relegation in the Northern League. As expected the club raised its game running out second team on the day and setting out the possibility of surviving for yet another year. Danny Higham`s double win in the 100m(11.1) and 200m(22.6) set the tone for afternoon. Toby Loveridge loyally made his way back to Merseyside from St Marys University in London and scooped both the 800m(2.00.0) and 1500m(4.07.3). But probably the most spectacular win came from a rejuvenated Billy Williams who cleared a magnificent 1.90m and reminded us once again of his potential. The 4 x 100m relay squad of Danny Higham, Wayne Ashall, Jesse Roberts and Sean Bosman were the only other win but the rest of the male contingent were fighting hard at the minor slots rarely dropping below third.

The women were equally enthusiastic with Kirsty Longley working her proverbial socks off with individual wins in the 800m(2.28.2), 1500m(4.58.3) and 3000m(10.27.8). She was well backed up by B winners Maxine Thompson at 800m(2.33.2) and Lisa Gawthorne at 3K(11.32.2). Amelia McLaughlin back from Birmingham easily took the A High Jump(1.71m) replicating her schools time and colleague Kate Doran the B event with 1.55m. The star act for the women turned out unexpectedly to be the 4 x 400m relay. Led by a strong Georgie Hannaway, Alice Donnelly and Maxine Thompson powered away to lead and hand over to a tired but jubilant Kirsty Longley. The result was never in doubt. Overall the club did enough to show they are well worthy of gracing this league but they`ll have to repeat the effort at the final encounter in August.