You are here: Home > The Great Escape…once more!

Once again there was more than a touch of drama as Liverpool Pembroke Sefton went into the last of their Northern League Track and Field matches at Manchester’s Sport City. A slip up and the club would have been humiliatingly relegated from this closely fought division. But as has happened before the members rose to the challenge and fielded a strong and talented team. There were star performances aplenty but it is hard to dislodge Kirsty Longley from the top smile spot with courageous wins at 800m (2.23.5), 1500m (4.56.00) and 3000m (10 23.6) plus a blinding anchor leg of the 4 x 400m squad that gave the club third. In all of these endeavours she was supported by B winners in the shape of Maxine Thompson (2.32.6), Lisa Gawthorne (5.23.9) and Zoe Tarrach (11.37.6).  A real touch of `girl power’. Amelia McLaughlin was a class apart in the High Jump with 1.74m, a season’s best, with predictably the club providing the B back-up in the shape of Alice Donnelly (1.50m).  At the core of the club’s point gathering were some excellent throws results with Rachel Hutchinson again in form in the Hammer second with 35.85m and Ruth Doran winning the B slot with 35.81m. Ruth also was a good second in the Shot(10.69m). 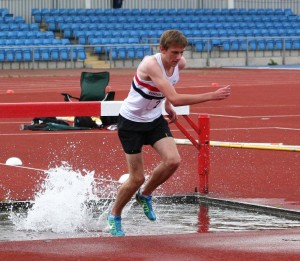 The men were also in excellent form with a stand-out High Jump win and personal best from Billy Williams (1.93m) and Wayne Ashall  (1.60m) scooping the B result. Although Danny Higham was designated the supporting role in the 400m he took the field apart with a 48.5 and had previously watched colleague Nathan Hilton narrowly take the A event on 49.4. Toby Loveridge provided very confident wins in the 800m (2.00.1) and 1500m (4.07.0). Ryan Blackwell, a newcomer to steeplechasing was edged for first spot in he 3K with 10.30.6 but that won’t happen so easily when he gets the hang of the event. At 5000m Alistair Nelson (16.36.3) and Mark Wynne (17.40.4) were useful runners-up.

Probably the most unexpected but delightful performance of the day from newcomer Dominic O`Hanlon whose 5.84m Long Jump earned him third place and some surprised glances. The trio of Dave Brown, Gary Ireland and Mark Line have gelled into a formidable force without necessarily winning an event. In particular Mark will be pleased with a Discus throw of 36.98m and Gary Ireland  a Hammer pitch of 37.70m and Shot delivery of 10.74m. Hidden away in the Pole Vault another vet Dave McComb soared to a height (2.80m) he hasn`t seen in years. When the relays came late in the afternoon the quartet of Danny Higham, Stuart Dolman, Wayne Ashall and Nathan Hilton shaved a victory in the 4 x 100m (43.9) and Danny plus Jesse Roberts, Sean Bosman and Nathan romped to 4 x 400m success (3.32.2). Little did they realise that this had ensured club victory in the match by the narrowest of margins and third overall thus ensuring another season in this good standard league. The hosts at Manchester should have played the Great Escape theme over the PA system as LPS exited the arena. Results 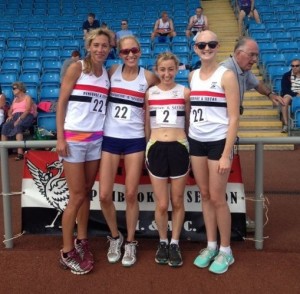 Winners all at Sport City…Zoe Tarrach, Lisa Gawthorne, Kirsty Longley and Maxine Thompson. Is that John Bradshaw in the background finally bowing to `girl power’?