You are here: Home > Sefton Harriers Roll of Honour

2014 as we know marks the centenary of the outbreak of WW1 and during the latter part of May this year I had the opportunity to visit some of the WW1 battlefields and cemeteries of Belgium and France. It was of particular interest to me as like many of my generation I can still recall ancestors who took part in some of the battles. My Grandfather a Lewis Gunner with the Manchester regiment won the Military Medal, which he later pawned during the great depression of the 1920s in which the ‘land fit for heroes’ was consumed by poverty and mass unemployment, his brother my great uncle was a prisoner of war who never recovered fully from his experience and lived the life of a recluse until his death in 1975.

During the trip I took the opportunity to seek out a couple of the names on the Sefton Harriers Roll of Honour  and I managed to located the grave panels of Lance Corporal John Clancy of the 1st Bn., King’s Own (Royal Lancaster Regt.) who killed on 13th October 1914, only 3 months after the war had started and Sergeant John Norman,  1st/10th Bn., The King’s (Liverpool Regiment) who was killed on 9th August 1916 on reporting his death the Liverpool Echo said of him “Of commanding personality and fine physique he was a familiar figure at most of the athletics festivals in the country. He was lately in the treasurer’s (staff) department of the Liverpool Gas Company. Norman was a prominent member of Sefton Harriers and, besides being a first-class cyclist, was a good runner.” Both  of these

young men who have no known graves, were active athletes prior to the outbreak of WW1 competing in local competitions before they gave the ultimate sacrifice in this ‘war to end all wars’. I photographed the grave panels with their names and I have added those photos alongside their names on the roll of honour for downloading.

The Sefton Harriers Roll of Honour was compiled soon after the end of WW1 and was a featured in each edition of the club’s annual handbook which members would receive each year. This small pocket sized book contained a list of the officers and fixture for that coming year, rules that members must follow and at the back was the ‘Roll of Honour’ faithfully reproduced up until the 1950s when I believe the handbook ceased to be published and was replaced by a double sided piece of card that contained fixture card and officials only. The ‘Roll of Honour’ contains the names of nine Sefton Harriers who lost their lives during WW1 and that of Corporal Artie Allen who was killed at the battle of the ‘Spion Kop‘ in the earlier Boar War.

Included in the nine names is that of Captain Noel Chavasss (1884-1917) who I am sure many of you will have heard or read about but in case you have not heard of Noel let me briefly outline his short but inspiring life. Noel was a twin born in Oxford his father later became Bishop of Liverpool and the family moved to Liverpool in 1900, both Noel and his twin Christopher represent Great Britain in the London Olympics of 1908. Noel trained as a doctor and worked at the Southern Hospital it was during this time he joined Sefton Harriers who were based in the Florence Institute on Mill Street only a stone’s throw away from the Southern Hospital. Noel enlisted in Royal Army Medical Core in 1913 prior to the outbreak of war, he saw active service in the 10th (Liverpool Scottish) Battalion, the King’s (Liverpool) Regiment during the war. In June 1915 at the Ypres Salient (near Hill 60) at the second Battle of Ypres when poison gas was used for the first time in April 1915.  He was award the Military Cross after the Battle of Hooge.
By July 1916 Noel was in the Mametz area of the Somme area and won the first of his two VCs, the citation reading “During an attack he tended the wounded in the open all day, under heavy fire, frequently in view of the enemy. During the ensuing night he searched for wounded on the ground in front of the enemy’s lines for four hours. Next day he took one stretcher-bearer to the advanced trenches, and, under heavy fire, carried an urgent case for 500 yards into safety, being wounded in the side by a shell splinter during the journey. The same night he took up a party of trusty volunteers, rescued three wounded men from a shell hole twenty five yards from the enemy’s trench, buried the bodies of two officers and collected many identity discs, although fired on by bombs and machine guns. Altogether he saved the lives of some twenty badly wounded men, besides the ordinary cases which passed through his hands. His courage and self-sacrifice were beyond praise.”

By the summer of 1917 Noel was back in Ypres area and was involved the 3rd battle of Ypres (Passchendaele) for which he won his second VCs this time it was posthumous as Noel was killed this time the citation read “Though severely wounded early in the action whilst carrying a wounded soldier to the dressing station, he refused to leave his post, and for two days, not only continued to perform his duties, but in addition, went out repeatedly under heavy fire to search for and attend to the wounded who were lying out. During these searches, although practically without food during this period, worn with fatigue and faint with his wound, he assisted to carry an number of badly wounded men over heavy and difficult ground. By his extraordinary energy and inspiring example was instrumental in rescuing many wounded who would have otherwise undoubtedly succumbed under the bad weather conditions. This devoted and gallant officer subsequently died of his wounds.” Noel is buried in Brandhoek’s New Military Cemetery.

My trip to the battlefields was a moving experience and allowed me in some small way to get a feel for the area and maybe just sense what it must have been like for those young men who answered the call. The scale of carnage is almost unbelievable, the intensity of the fighting is horrific, the unimaginable conditions these poor chaps lived and died in beyond description. Often the great battles of WW1 resulted in stalemate, little pockets of land captured and then more often than not lost again soon after with great casualties on both sides.

Fate decreed my father born less than 10 years after the ‘war to end all wars’ also found himself caught up in the ramifications of this European madness, and volunteered for service midway through WW2 when he became old enough. He saw active service as a torpedo man in the Royal Navy from 1943 until the end of the conflict. The fact that both my father and grandfather both saw action and witnessed the horrors of war made me reflect on how lucky  I was to have been born in the 1950s as my generation escaped the two most dreadful conflicts that engulfed Europe during that  century. 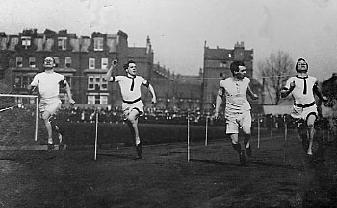 The Chavasse twins who can be seen competing together in the Varsity Sports 100 yards in 1907. In this race, N.G.Chavasse (Trinity) (furthest right) and K.G.Macleod (Pembroke, Cambridge) (second from right) dead heated in a time of 10.5s.