You are here: Home > Alan Cadwallader

For those who had the good fortune to be involved with Sefton Harriers in the mid 1970s and throughout 1980s will be saddened to hear of the death of Alan Cadwallader on 21st December aged 78.

Alan joined Sefton Harriers in the summer of 1976 at age of 39 which was unusual in those days for someone to take up running at such a ripe age as veterans competition was still in its ‘infancy’,  however he came from a background of cycling and took to endurance running like a duck to water. He was not without ability and recorded a number of notable performance on the road and country, he was instrumental in the re building of the road running section of Sefton Harriers. Alan would regularly wind up the training runs from our Crawfords training venue in Wavertree. I can recall many times hanging on to this guy 20 years my senior,  who never seemed to understand the mental and physical anguish he put us through by frequently injecting sub 5.30 miles some 7 miles from home!  Oh how it hurt, but it did us all good and we all benefited from his tenacity. 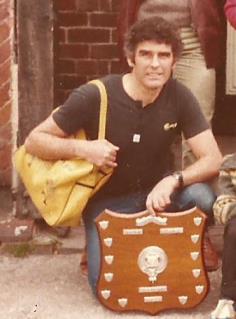 A painter by profession, Alan learned his trade in the post war years when work was plentiful but poorly paid. He worked on and off for many years as a ships painter and many tales abound about Alan’s exploits on the Liverpool docks in the 1950s. There is one story that stands out and still brings a smile to the face of those who heard of it. As a young man Alan was on a cycling holiday in France for reasons I never really understood but was probably financialy motivated. (he ran out of money I guess) He signed up and joined the French Foreign Legion something not undertaken lightly you might think. It was not long before Alan recoginised that the Legion was not for him, however how to get out of this situation was another matter. Being the ever resourceful man he was Alan managed to make his way back to England without any documents and commenced work once again painting ships in Liverpool docks. Like Alan, the French Foreign Legion were also resourceful and they tracked Alan down to the docks and I am told they made a number of attempts to apprehend him and take him back. A cat and mouse game was played out for sometime with Alan out witting them and always managing to stay one step ahead of them until they gave up on him.

Alan contributed more to the sport of athletics than he ever took out, not only was Alan a good runner he was more importantly a good club man laying out cross country courses at West Derby and giving lifts to to races in cars and vans that left a lot to be desired, but they always just about managed to get us there and back. There was never a prouder man than when in later life he was to be seen supporting his talented sons at local events. His sons were a testimony to Alan’s philosophy of putting in the hard work to reap the rewards as they achieved success at the highest levels . A free spirit however, first and foremost a family man and always impressed the values of family life as a recipe for sanity in a crazy world.

One Response to Alan Cadwallader