You are here: Home > Rosie and Dan take county titles

The first challenge of the year for cross country runners is the county championships. This always sees Liverpool Pembroke Sefton split down the middle as runners head in different directions. The Merseyside contingent was at Sherdley Park, St Helens. This occasion was marked by two convincing victories. At Under 17 Rosie Johnson, top of the 2014 UK rankings at 1500m, was untroubled after an initial challenge and came home with something to spare. Dan Slater`s victory followed a similar pattern in the U15 race. The English Schools Cup winner, not unexpectedly, was able to deal effectively with local aspirants. In the same race Matt Richardson ran very strongly to collect the bronze medal. With Joe Martin on 16th the club was one short of a possible winning squad. At U13 Joe Houghton was a very positive 5th and had Matt Slater(11) in support. The parallel girls race saw Katie Richardson on 13th and Natasha Johnson on 23rd.

At U11s Faye Hannaway(5) and Jacob Slater(6) both looked good. Aaron Jarvis put in a sound performance finishing 8th in the U20 event and then LPs were into the seniors. Clare Constable was splendid in 7th place and had Lauren Wilson(12) and Vicki Jones(26) for company. The club was still team-less until the final men`s race. Mark Wynne(14) ran confidently followed by an excellent trio of over Over 50`s, Greg Callaghan(37), John Halson(42) and Chris Pedder(45). Greg and John were rewarded by first and second in their age category. The team closed in with Danny Gilbody(58) and the amazing super-vet John Dobie(82). Eighth team was not unreasonable in the circumstances. Merseyside Results

Over at Witton Park for the Lancashire Championships LPS had one team result, a second place in the U17 Womens, Anna Hulme(8), Charlotte Mawdsley(12) and Jessica Gonzalez-Green(15). There were only two in their respective U13 races, Alex Lang(18) and Francesca Price(30). At U15 Dan Jones demonstrated his emerging talent by a strong 5th spot with Ross Harrison(12) and Adam Jones(13). One more counter and team medals would have been secured. Jack Crook is improving and 9th in the U17s was impressive. Maxine Thompson was 10th in the U20s but arguably the best performance here came from Alistair Nelson who took silver and was only marginally short of gold. Two seniors made the trip to Blackburn, Sean Kirkbride(45) and Peter Gaskell(62). Lancashire Results

To show how diverse the club is there were two representatives in the Staffordshire Championships Under 20 race at Wolverhampton. Korey Hallet-Branch was 7th and Aaron Houseman 13th. Korey`s performance is likely to earn him a call-up for the Inter-Counties championship. Staffordshire Results 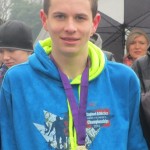 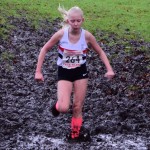 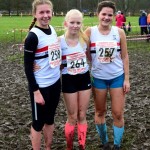 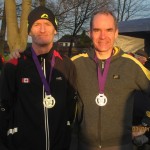 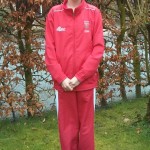 ← Alan Cadwallader
Rosie well clear of the field at Burnley →