You are here: Home > A good day at the Oval

A good day at the Oval

The Merseyside Track and Field Championships were held at Bebington Oval, the weather and conditions perfect for top class performances from Liverpool Pembroke Sefton athletes. Once again 17 year old Rosie Johnson was in superb form. Her 800m was virtually a time trial as she went for a personal best. Sustaining a high tempo throughout she literally ran herself into the ground at the tape to record an outstanding 2.07.0 . This was not only a county record but shaved the long standing LPS club record. Gradually she is annexing records and becoming the fastest club middle distance runner of all time.

The club high jumpers were there in vociferous support and came away with four medals. Kai Finch sustained his recent high form taking the U17 title with 1.75m. Owen Southern was runner up(1.55m) and there were two other silver stars U17 Hannah Wills(1.55m) and U15 Sadie McNulty(1.51m). Elsewhere in the field U17s Matt Low leapt to second in the Triple Jump and Ben Harding threw a mighty 43.86m Javelin, also for second spot.

The rest of the medal action was in the middle distance. Clare Constable collected the Over 35 800m title and U20 Jonathan Bride worked mightily hard for his silver in the 800m(2.03.3) while U17 Matt Richardson collected bronze with a useful 2.05.9. Vet Mark Wynne ran a superbly controlled3000m in 9.35.2 also for third place.

There is always a bonus surprise and this came in the shape of Emily Brough, a St Edmunds Crosby Primary School pupil, who jumped the U13 800m field on the final bend and stormed to victory in 2.34.0. She also made a dramatic appearance in the 1200m and despite her lack of experience produce a powerful finishing drive to collect second(4.14.2).
Merseyside Results

The Liverpool Pembroke Sefton contingent at Stanley Park, Blackpool for the Lancashire County Track and Field Championships added more medals to those gained in the Merseyside Championships. Senior Luke Edwards took the 400m title in 49.0 replicating team mate Nathan Hilton`s performance at the Oval. The 400m joy continued as Ed Latimer won the U17 400m in 50.93. Further sprint success came as Ed`s younger brother U13 Sam bagged two silvers in the 100m(13.7) and 200m(28.1). Lauren Lewis also was also marginally second in the U15 100m in 13.1. Emma Givens gained third in the Senior 110m Hurdles in 16.5. Once again Amelia McLaughlin was in a class of her own in the U20 High Jump clearing 1.70m. 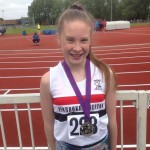 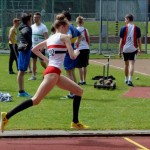 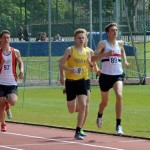 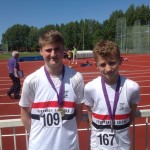 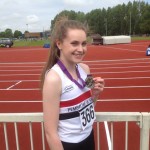 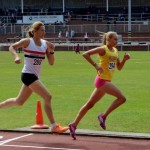 Clare Constable in action in the 800m