Alan Cooper an old friend of ours from the Sefton Harriers days was recently on a touring holiday in France, Germany, Switzerland, Belgium and on the way back he made a Sefton Harriers pilgrimage to Noel Chavasse’s grave.

Noel died as a results of injuries sustained at the Battle of Passchendaele on the 4th August 1917, he is the most decorated man in British military history and there has been much written about this brave man and his many acts of courage, however what is often over looked is that Noel was also a top class athlete who was a member of Sefton Harriers in the pre war WW1 years, along with his twin brother Christopher they both competed in the 1908 London Olympics.

I hope to do an article on Noel’s athletics career to mark the centenary of his death in 2017, as part of commemoration of WW1, until then may I direct readers to the Noel Chavasse page we have on our website 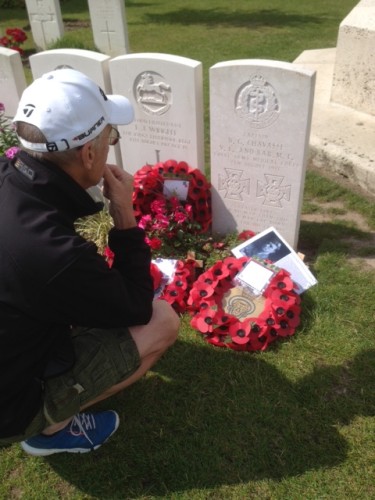