The new track at Edge Hill University hosted its first big athletic meeting in advance of its formal opening in September. Although a relatively modest Division 2 Match of the Northern League it contained a number of high quality clubs and athletes and Liverpool Pembroke Sefton needed to field a decent squad to uphold their status. Their men were in dominant form across the board. Danny Higham took both the 100m(11.3) and 200m(22.2) with good support from Andrew Williams on 11.8 and 23.7. The 400m 400m Hurdles, and 800m proved an A/B walkover for the club`s representatives. At one lap LPS had Nathan Hilton(49.0) and Jesse Roberts(52.9), the hurdles supplied Kyle Nicholls(63.5) and Rob Parkinson(64.6) while the 800m duo of Jonathan Bride(2.04.4) and Jack Crook(2.06.0) sparkled. There were a couple of runner-up spots in the 1500m, Sean Kirkbride(4.16.0) and Joe Chadderton(4.38.5), also in the 5000k in the shape of Mark Wynne(17.22.4) and Chris Pedder(18.20.3). Kyle Nicholls was a further excellent second placer in the 3000m Steeplechase.

The `big boys’ had a real field day led by a great double win in the Discus, Dave Readle(37.26m) and Mark Line(32.53m). They also knocked off significant scoring positions in the other throws together with Dave Brown who will be probably most pleased with his Shot Putt(10.84m). Absences left the club weaker in the jumps with probably Matthew Ingram`s third in the Triple Jump(12.05m) the best ranked. Given their dominance in the individual events it came as no surprise that the slick 4 x 100m  relay squad (Higham, Williams, Roberts, Hilton, 45.3) and 4  x 400m(Roberts, Williams, Higham and Hilton,3.28.2) delivered in immaculate style.

The women were fewer in number but had their glory moments. For many the best performance of the day came from Kirsty Longley in the 3000m. When an Isle of Man girl took off and established a huge lead it looked like a boring procession. But with a remarkable degree of concentration Kirsty reduced the gap relentlessly and it was clearly an astonished Manx girl that saw the diminutive Longley tear past to victory in 10.07.3. Samantha Wade in support ran 11.53.08. On a par though for entertainment was Rosie Johnson`s clinical destruction of the field in  the 1500m(4.49.0). A different class in many ways but equally praiseworthy was Clare Constable, more than twice Rosie`s age, who was a splendid runner-up(5.00.5) and proof that talent never really disappears. Jenny Pyatt, a significant addition to the club`s throws group, won the Discus with 37.37  and was also second in the Shot(9.68m) and Javelin(32.52m). Amy Wells(32.36) also threw the spear well. A returning Rachel Hutchinson got back in the swing of things with a Hammer throw of 35.80 and Shot Putt of 8.33. Sprinters Emma Givens, Hannah Wills, Lucy Townson gave their all as did Flossie Dickinson in the 800m and jumpers in the shape of Kate Doran and Tawanda Lungu. Tawanda won her Triple Jump with 10.03m and could clearly go much further with sustained training. There was a minor flourish to the day as Givens, Townson, Wills and Lungu combined in the 4 x 100m(53.4) for an unexpected second place.

Overall the club had a very good day on their home territory finishing second just behind the West Cheshire club and confirming their presence in next year`s league line-up. The visitors to Ormskirk were suitably impressed with the top quality facilities, the superb organisation skills of the local club and the magnificent support of the university staff. There will be many more high profile events heading this way. 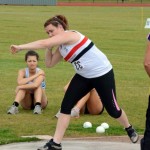 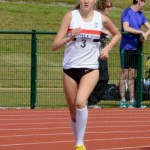 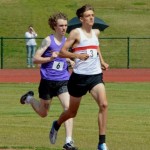 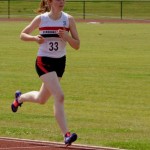 Flossie Dickinson in action in the 800m 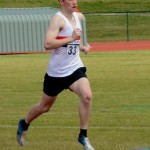 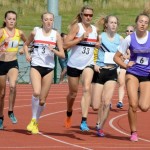 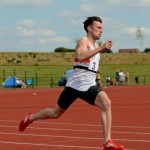 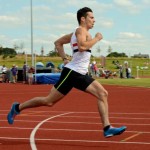 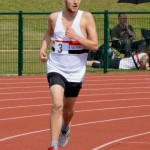 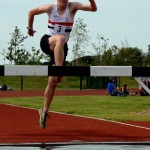 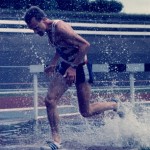